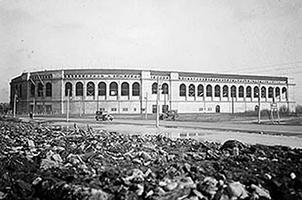 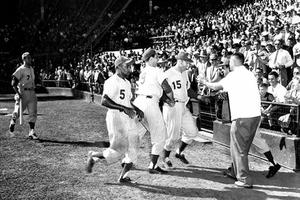 In the photograph are #7 Lou Kahn, #5 Hector Rodriguez, #19 Don Johnson, and #15 Archie Wilson. To the right is Avie Bennett with his son Paul on his lap, c 1950s (courtesy Paul Bennett). 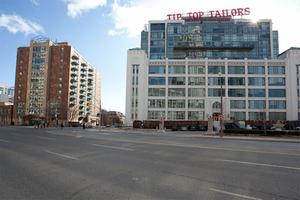 The site of Maple Leaf Stadium to the left of Tip Top Tailors, 2012 (photo \u00a9 by James Marsh).
PreviousNext

In a heavy downpour, on 29 April 1926, some 18 000 fans attended the opening of the new Maple Leaf baseball stadium at the foot of Bathurst Street. The Leafs rallied with five runs in the ninth inning, beating the Reading Keystones 6-5 in the tenth.

The baseball Maple Leafs predate the hockey MAPLE LEAFS by some 30 years, taking their name in 1895. They played in the International League against teams such as the Buffalo Bisons, Havana Cubans, Richmond Virginians and Montreal Royals. In 1951, Jack Kent Cooke acquired the club and enhanced the games with special promotions and celebrity appearances. In a golden era beginning in 1954, the Leafs won three pennants in four years. The 1960 team crushed the competition, finishing with a 100-54 record, 17 games ahead of second place Richmond.

The team played in Maple Leaf Stadium, the kind of classical ballpark now replicated in Baltimore's Camden Yards and elsewhere, with huge arched windows, box seats practically on the field, a perfect green lawn and views of Toronto harbour. On 7 May 1950, almost 18 000 fans watched the Maple Leafs make history by playing in Toronto's first professional sporting event to take place on a Sunday.

The Leafs were relocated to Louisville following the 1967 season and the stadium was demolished the following year. The Major League BLUE JAYS arrived in 1977.