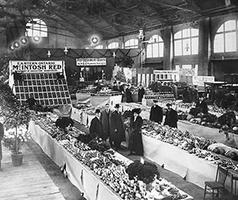 "Protesters Shout Down Planners and Save Market"

At a public meeting held in the fall of 1971, something extraordinary happened: a crowd of angry citizens who wanted to save North America's oldest continuously operated market shouted down the city planners who had decided to demolish it.

There has been a public market on the present site of the St Lawrence Market since 1803, when it was established by Lieutenant-Governor Peter Hunter. The first permanent market building, which was constructed in 1831 between King and Front streets (on the site of today's North Market and St Lawrence Hall), also housed the town hall. Destroyed by the GREAT FIRE of Toronto in 1849, that market building was replaced by ST LAWRENCE HALL and a new market building behind it. South on Front Street, where the main market building is today, the city had built a new city hall in the 1840s.

When the civic offices moved to the third city hall (now OLD CITY HALL) in 1898-99, it was decided to reconstruct the old building as a larger and more efficient market. The cupola, pediment and side wings were removed and a huge roof was placed over the whole structure. The new building was nicknamed Siddall's Shed after its architect, John William Siddall.

That the market is one of the glories of Old TORONTO was emphasized when National Geographic named it the finest food market "in the world!"