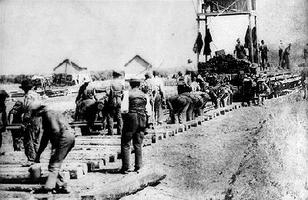 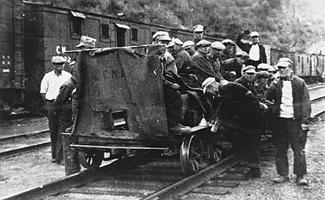 Canadian Northern Railway was incorporated (1899) as a result of the amalgamation of 2 small Manitoba branch lines. It was built up over the next 20 years by its principal promoters, William Mackenzie and Donald Mann, to become a 16 093 km transcontinental railway system. The promoters depended heavily on land grants and on the sale of government guaranteed bonds of their company. They built a strong Prairie system, but came to face stiff competition from their transcontinental rivals, the Canadian Pacific Railway, the Grand Trunk Railway and the Grand Trunk Pacific Railway. To meet that competition, a transcontinental expansion program was undertaken. The last spike was driven in Jan 1915 and in Oct of that year an excursion train carried parliamentarians and journalists to Vancouver and on to Victoria. That expansion, however, proved crippling, and severe financial exigencies during WWI repeatedly forced the promoters to seek government assistance. In return for aid given, the federal government ultimately demanded all the shares of the company. Mackenzie and Mann were forced out of the company, which then became one of the first major components of what would soon become the publicly owned Canadian National Railways. The corporate identity of the Canadian Northern Ry was retained until 1956, but its existence as an independent company ended with nationalization in 1918.