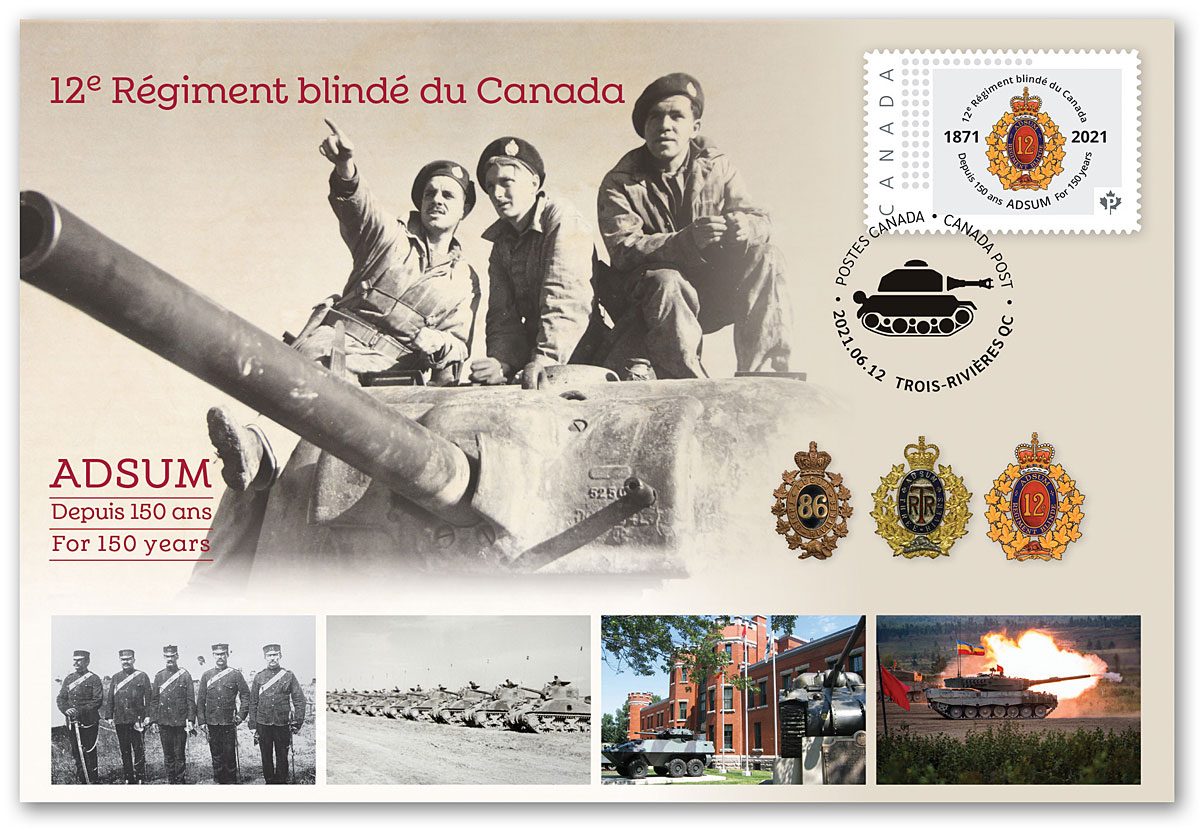 The Three Rivers Regiment was not mobilized for the First World War but contributed to the 178th (Canadien-Français) Battalion, Canadian Expeditionary Force. In Britain, the 178th was absorbed into the 10th Reserve Battalion to provide reinforcements to the Canadian Corps on the Western Front.

In 1998, the Department of National Defence decided that 12e RBC would perpetuate the 259th Battalion of the Canadian Siberian Expeditionary Force.

In 1920, the 86th designation was removed from the unit’s title and it became the Three Rivers Regiment. In 1936, it became a tank regiment, one of six created by the Canadian Army. None of these new regiments had tanks or other mechanized vehicles. Private automobiles were frequently used to simulate armoured vehicles during training.

The Three Rivers Regiment (Tank) was mobilized on 1 September 1939, at the outbreak of the Second World War. In November 1940, it was assigned to 1st Canadian Armoured Brigade. During training at Camp Borden, Ontario, the regiment was redesignated 12th Army Tank Battalion (The Three Rivers Regiment (Tank)). It sailed to England in June 1941, where it received its first tanks.

After two years of training, the regiment was reequipped with Sherman tanks. It landed in Sicily at midmorning on 10 July 1943 as part of 1st Canadian Division’s assault force for Operation Husky. The regiment fought across the island for three weeks. ( See Canada and the Italian Campaign.)

The regiment landed on the mainland of Italy on 12 September and took part in its first battle in October as the Allies fought up the Italian boot. One of its most memorable actions was at Ortona, 20–27 December 1943, a fierce battle fought in the ruins of the mediaeval city. In early March 1945, the regiment was transferred to northwest Europe, where it took part in the closing battles of the war.

The regiment was demobilized in November 1945 and became an active militia unit the next year. Initially it was an artillery unit, the 46th Anti-Tank Regiment. In July 1947, the unit reverted to an armoured regiment, this time as the 24th Armoured Regiment (Three Rivers Regiment); the number 12 had been assigned to another armoured regiment. In 1949, the unit adopted its French designation. In 1968, it became 12e RBC (Milice) when a regular force regiment was established based on the history and traditions of the Three Rivers Regiment.

The regular force regiment was established to provide a French-speaking armoured unit in the Canadian Armed Forces. Since then, 12e RBC has served on domestic operations, peacekeeping and peace support operations and in Afghanistan.

Within Canada, the regiment supported security operations during the October 1970 FLQ crisis, the 1976 Montreal Olympic Games and the 1990 Oka Crisis (also known as the Kanesatake Resistance). It also responded to several natural disasters such as floods and the 1998 ice storm.

The regiment provided a squadron for peacekeeping in Cyprus in 1973, while the full regiment served three six-month tours between 1977 and 1991, during which it manned observation posts. From 1984 to 1989, 12e RBC was the armoured component of the Canadian Air/Sea Transportable Brigade Group (CAST), which was tasked with reinforcing Norwegian defences in the event of an attack. (Norway’s security was vital to NATO, given its proximity to the Soviet Union.) A 12e RBC battle group and several detached reconnaissance squadrons served in the Balkans between 1992 and 1996. Between 2004 and 2011, 12e RBC contributed five reconnaissance squadrons and a tank squadron to the war in Afghanistan.

On 13 April 2009, 21-year-old Trooper Karine Blais was killed and four others injured when their armoured vehicle hit an improvised explosive device in Afghanistan. Blais was the second Canadian female to die in combat and was only two weeks into her deployment.

In 2019, 12e RBC led NATO’s enhanced forward battle group in Latvia. On 12 June 2021, Canada Post issued a stamp and commemorative envelope in honour of the regiment’s 150th anniversary. Today, 12e RBC is the only armoured regiment to have a regular and a reserve component. 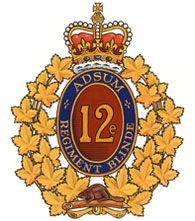 Badge: Within a wreath of maple leaves, an oval shield with 12e in the centre, surrounded by a band with ADSUM at the top and REGIMENT BLINDE on the bottom, with a beaver on a log at the base of the wreath, all surmounted by the Crown.