Anahareo was born to Matthew and Mary Bernard in Mattawa, Ontario, a small community on the border of Ontario and Quebec, just north of Algonquin Provincial Park. Her father was Mohawk and  Algonquin, her mother Algonquin. Anahareo’s great-great paternal grandmother was Scottish. She was captured during the Iroquois Wars and married to Mohawk chief Naharrenou, from which the name Anahareo is derived.

Anahareo’s mother died when she was four. Anahareo was sent to live with her paternal grandmother and her three siblings to other relatives. At age 11, the grandmother fell ill, and Anahareo’s aunt and cousins moved in. Eventually, Anahareo’s father reunited the family.

As a child, Anahareo disliked school, preferring instead to run and play in the woods. “Off I’d go on those summer mornings, happy as a lark, to a day of hooky and adventure in the woods,” she later wrote.

In 1925, when Anahareo was 19, she took a waitressing job at Camp Wabikon, a resort on Lake Temagami, Ontario. It was there that she met 36-year-old Archibald Belaney, later known as Grey Owl, who was working at the camp as a guide. The two began a courtship, and Anahareo began spending time with Belaney at his home in the bush near Forsythe, Quebec.

While in Lac-Simon, Quebec, an Algonquin band invited the couple to a feast. There, Belaney and Anahareo asked the chief for a marriage blessing. By Canadian law, Belaney was still married to his first wife, Angele, but for the couple the ceremony was official recognition of their union.

Anahareo worked to learn as much as she could about bush life from Grey Owl, who was a trapper by trade. Around 1928, when the trapping business began to slow, Grey Owl took up writing about his life in the bush. He wrote first for British magazine Country Life and later for Forest and Outdoors, published by the Canadian Forestry Association. The articles led to speaking engagements, a book deal and eventually caught the attention of James Harkin, head of the National Parks branch of the federal government. Harkin commissioned a film, Beaver People, about Belaney, Anahareo and their efforts to protect dwindling beaver populations. Harkin also recognized the potential of the couple’s growing public profile. In 1931, he offered them housing at Riding Mountain National Park in Manitoba in the hopes they would draw tourists, which they did. Later that year the parks branch moved Grey Owl and Anahareo to Prince Albert National Park, Saskatchewan, with the same goal.

Though she knew it to be false, Anahareo supported Grey Owl’s public image as an Indigenous man because she thought it would help his conservation efforts. She did not, however, know that he was entirely British until after his death, since Grey Owl had told her he was part Scottish, part Indigenous and born in Mexico. Despite being lied to, following Grey Owl’s death in 1938 Anahareo worked hard to restore his image from fraudster back to conservationist. “The more Archie did, the more Indian he became in the eyes of the public,” she wrote in her autobiography Devil in Deerskins, “and he went along with it and became more Indian than Tecumseh himself. One may as well go the limit should it happen to facilitate the job at hand.”

Adventurous and independent, Anahareo took up prospecting (the search for mineral deposits such as gold) in 1928 when Grey Owl’s trapping business began to slow. Throughout their relationship Anahareo would periodically venture off to prospect for months at a time, leaving Grey Owl at home to write. Since the couple had become public figures, the Calgary Herald reported on Anahareo’s activities. Under the headline “Grey Owl’s Wife Leaves Alone in Search for Gold,” they noted Anahareo had “the courage of the sturdiest men.” 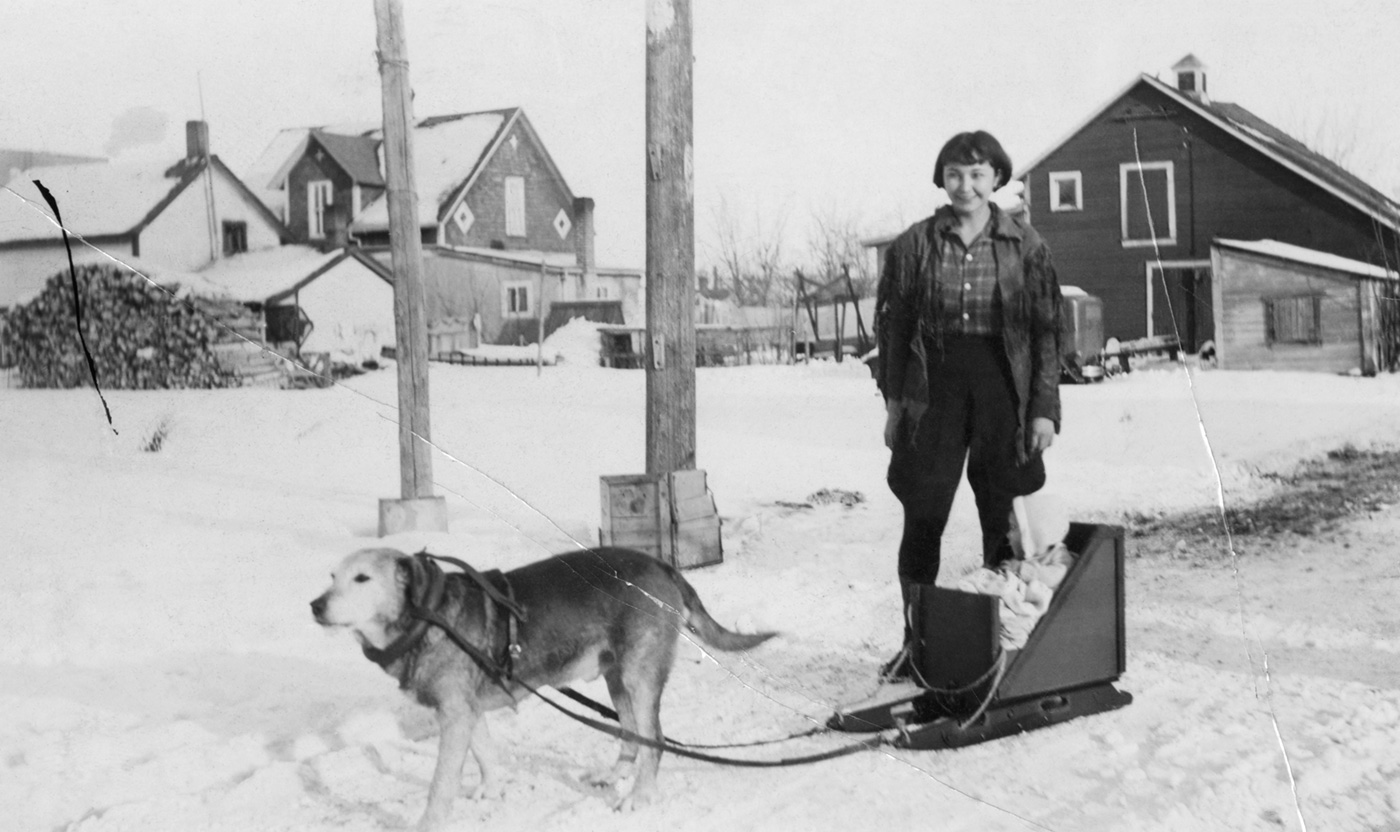 Anahareo with her daughter, Katherine Moltke, in Saskatchewan, c. 1942-43.

Anahareo and Grey Owl’s first daughter, Shirley Dawn, was born August 1932, in Prince Albert, Saskatchewan. Dawn spent much of her early years with family friends, the Winters, in Prince Albert. As a new mother, Anahareo welcomed the support Mrs. Winter offered her. Of the early days of mothering Anahareo wrote, “I don’t suppose I would have been so dumb about such things if it hadn’t been for the fact that I had just put down my prospector’s pick to pick up a safety pin.” The arrangement also allowed Anahareo to continue her prospecting adventures. When Anahareo and Grey Owl separated in 1936, Anahareo was pregnant with their second daughter. Anne was born in June 1937, in Calgary, Alberta. From Calgary Anahareo moved to Saskatoon where, desperate for employment, she appealed to the mayor for help. The mayor put her in touch with a schoolteacher named Wilna Moore. Moore arranged to have Anne placed in the care of Bethany Home, a Salvation Army residence for unwed mothers. While Moore appeared well-meaning, her actions were no doubt informed by a racial and moral superiority consistent with that of the Canadian government, whose policies of removing Indigenous children from their parents continued into the late 20th century (see Residential Schools; Sixties Scoop). Anne lived in the home until she was three, when Anahareo gave an Anglo-Canadian couple permission to adopt her. 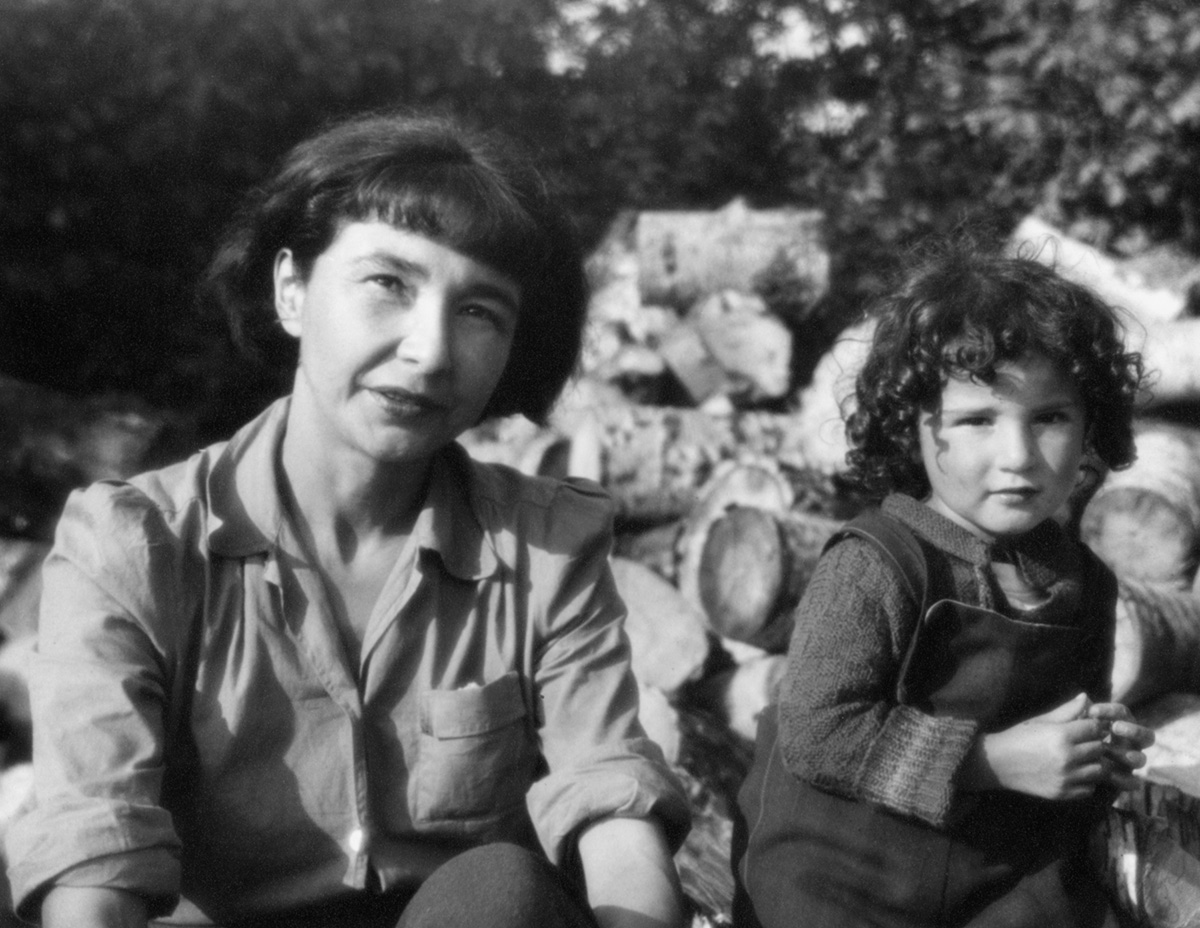 In 1939, Anahareo met her second husband, Eric von Moltke Huitfeldt, a count from Sweden. In 1942, while Eric was overseas serving in the Second World War, Anahareo gave birth to their daughter, Katherine. Upon his return from the war the couple had a rocky relationship until they separated, on good terms, in 1959.

More than any other individual, Anahareo played an important role in converting Grey Owl into a dedicated conservationist. In Pilgrims of the Wild (1934), Grey Owl recounts how Anahareo, by saving the lives of two beaver kits, led him to change his whole way of life and to work for the protection of wildlife.

After Grey Owl and Anahareo broke off their relationship, Anahareo continued to champion the rights of wild animals. She joined the Association for the Protection of Fur-Bearing Animals and campaigned against leg-hold traps and wolf poisoning, among other causes. Anahareo was admitted into the Order of Nature of the Paris-based International League of Animal Rights in 1979. She is the author of two books: My Life With Grey Owl (1940) and an autobiography, Devil in Deerskins (1972). In 1983, she was appointed a Member of the Order of Canada.