Andre De Grasse was born to Beverley De Grasse and Alex Waithe on 10 November 1994. He has three siblings: Julian, Alexandra and Dantee Waithe. His father moved to Canada from Barbados as a teenager, while his mother immigrated to Toronto from Trinidad and Tobago in her mid-20s. Both De Grasse’s parents were sprinters in their youth.

De Grasse was raised by his mother in Markham, Ontario, a city in the northeast corner of the Greater Toronto Area. As a child, De Grasse played soccer, basketball and baseball. Later, as a student at Milliken Mills High School, De Grasse’s attention narrowed to basketball. He excelled at the sport until Milliken Mills cancelled its basketball program in De Grasse’s final year. At the time, De Grasse was struggling in school: his grades were low, and he was hanging out with the wrong crowd and doing drugs. The loss of the basketball team didn’t help. On a whim De Grasse, 17, decided to join friends and compete in a regional high school track and field meet.

During the York Region Track and Field Championships, held at York University in May 2012, De Grasse competed in the senior boys 100 m dash, 200 m dash and long jump. When he took his spot at the starting line for the 100 m dash — his first time trying the sport — De Grasse ignored the starting blocks, instead standing upright and sideways, like a baserunner leading off first base. He wore a t-shirt, baggy basketball shorts and borrowed track spikes.

It took De Grasse 10.91 seconds to get from that awkward stance to the finish line. Though it wasn’t fast enough to win (he placed second), his time was remarkable, considering both his age and lack of experience. It is unusual for men in this age category (senior boys) to run 100 m in under 11 seconds, and De Grasse had done so in his first race, without the aid of starting blocks or coaching.

The feat caught the attention of Tony Sharpe, a former Olympian who happened to be in the stands that day. Sharpe, who won a bronze medal at the 1984 Summer Olympics in Los Angeles, California, invited De Grasse to join his track club, the Speed Academy, in Pickering, Ontario. “I’ve been in this sport 40 years, competed in the Olympics, seen a lot of fast guys,” Sharpe would later tell Scott Reid of the Orange County Register. “In terms of pure talent, I’ve seen nothing like Andre De Grasse.”

After graduating from Milliken Mills in 2012, De Grasse attended Coffeyville Community College in Coffeyville, Kansas, from 2012 to 2014. Coffeyville, like other “junior” colleges, is well known for its athletic program, and is generally considered a track and field powerhouse. Many student athletes begin their careers at junior or community colleges and then transfer to major colleges. At Coffeyville, De Grasse won five National Junior College Athletic Association (NJCAA) titles, including two 200 m dash titles and one 100 m title.

From there, De Grasse was pursued by colleges all over the United States. He chose the University of Southern California (USC) and began training with coach Caryl Smith Gilbert in fall 2014. As a member of the USC Trojans, De Grasse turned heads at the National Collegiate Athletic Association (NCAA) Championships in June 2015. He won the 100 m dash with a time of 9.75 seconds and the 200 m dash in 19.58 seconds. Both times were wind aided, meaning the runners were assisted by a tailwind of over 2 m per second, and therefore couldn’t be counted as official NCAA records. Still, De Grasse’s times represented two of the fastest in the history of the sport. That year, for example, the fastest wind-legal times were 9.74 seconds in the 100 m, posted by American sprinter Justin Gatlin, and 19.55 seconds in the 200 m, posted by Jamaican sprinter Usain Bolt.

In the summer of 2015, Toronto hosted the Pan Am and Parapan Am Games, where De Grasse competed in the 100 m and 200 m races, as well as the 4x100 m relay. As a hometown athlete hot off his remarkable performance at the NCAA Championships, De Grasse’s presence at the Games was highly anticipated. It had been 19 years since Donovan Bailey’s gold medal performance at the 1996 Olympic Games, and 16 years since Bruny Surin matched Bailey’s time of 9.84 seconds and won silver at the 1999 World Championships.

For a brief moment, many thought De Grasse had won a third gold medal after his team finished first in the 4x100 m relay. They were disqualified, however, once it was confirmed that Gavin Smellie had stepped on the lane line during the first leg of the race.

During the Games, many observed what appeared to be De Grasse’s bewilderment with his rapid rise to stardom. He lacked the bravado typical of most of the fastest men in the world, looking around in awe as fans cheered the announcement of his name at the starting line.

“A lot of people before this, they didn’t know how to pronounce my name,” De Grasse told the Toronto Star following his 200 m win. “They used to say De Grasseeee. But now I think everybody knows that my name is De Grasse [pronounced de grass].”

In August 2015, immediately following the Pan Am Games, De Grasse competed in the International Association of Athletics Federations (IAAF) World Championships in Beijing, China. It was the first time the 20-year-old competed against the likes of Usain Bolt, the fastest man in the world, and Justin Gatlin, who was generally considered the favourite to win. De Grasse, with a time of 9.92, tied for bronze with American Trayvon Bromell, behind Gatlin and Bolt, who won the race.

De Grasse became a professional sprinter in December 2015, signing a multi-year, $11.25 million sponsorship contract with Puma. He also left the University of Southern California to work with coach Stuart McMillan at the ALTIS training centre in Phoenix, Arizona.

At the 2016 Olympic Summer Games in Rio de Janeiro, Brazil, De Grasse took home three medals. He won silver in the 200m, finishing behind the great Jamaican runner, Usain Bolt, and bronze in the 100m, behind Bolt and American Justin Gatlin. De Grasse also took home a second bronze as a member of the 4x100m relay team, with teammates Akeem Haynes, Brendon Rodney and Aaron Brown. He was the first Canadian athlete to take three sprint medals at a single Olympic Games. 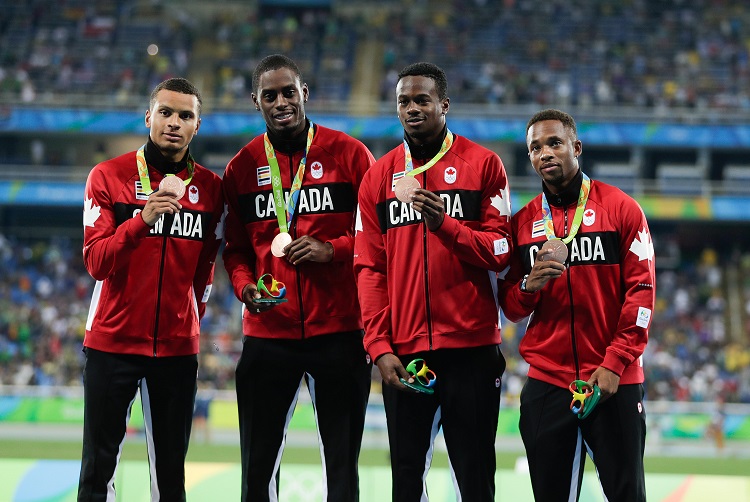 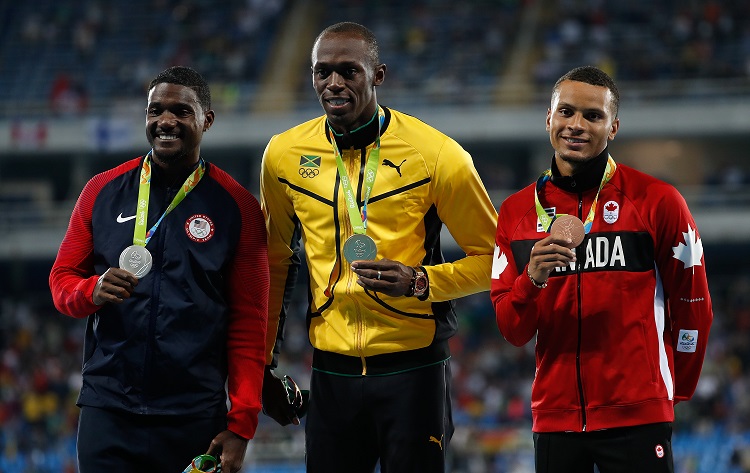 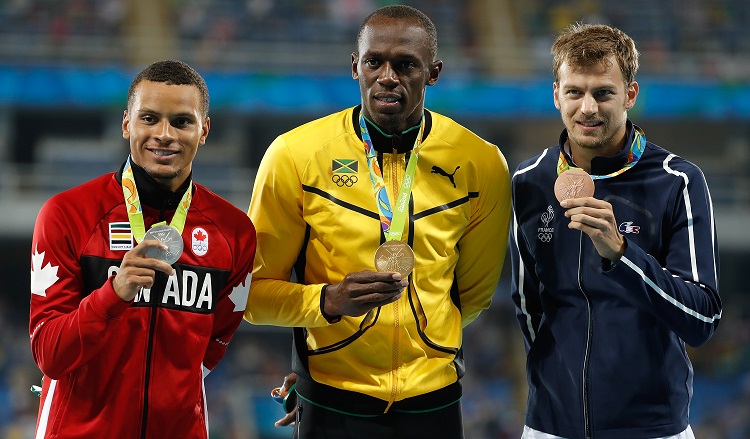 Following the Games, he returned to the University of Southern California. He finished his degree in sociology in December 2016.

Prior to the 2017 world championships, De Grasse was considered a favourite for gold in the 200m. He was also looking forward to facing Usain Bolt in the 100m. "I want to beat him before he retires,” he told the CBC. However, a hamstring injury forced De Grasse to withdraw from the championships. The following year, he was named to the Canadian team for the 2018 Commonwealth Games but withdrew to work on his fitness. That July, he suffered another hamstring injury during the national championships and lost his Canadian titles in both the 100m and 200m to teammate Aaron Brown.

De Grasse and his partner, American hurdler Nia Ali, welcomed daughter Yuri in 2018. The pair met while they were both track athletes at the University of Southern California. Ali won silver in the 100m hurdles at the 2016 Olympic Summer Games.

Also in 2018, the sprinter launched the Andre De Grasse Family Foundation, a charitable organization aimed at empowering youth through sport and education. The foundation’s first initiative was the Andre De Grasse Future Champions Fund, which it established in conjunction with the Athletics Canada Foundation. The Fund provides scholarships to high school athletes who are not yet part of a track and field club. 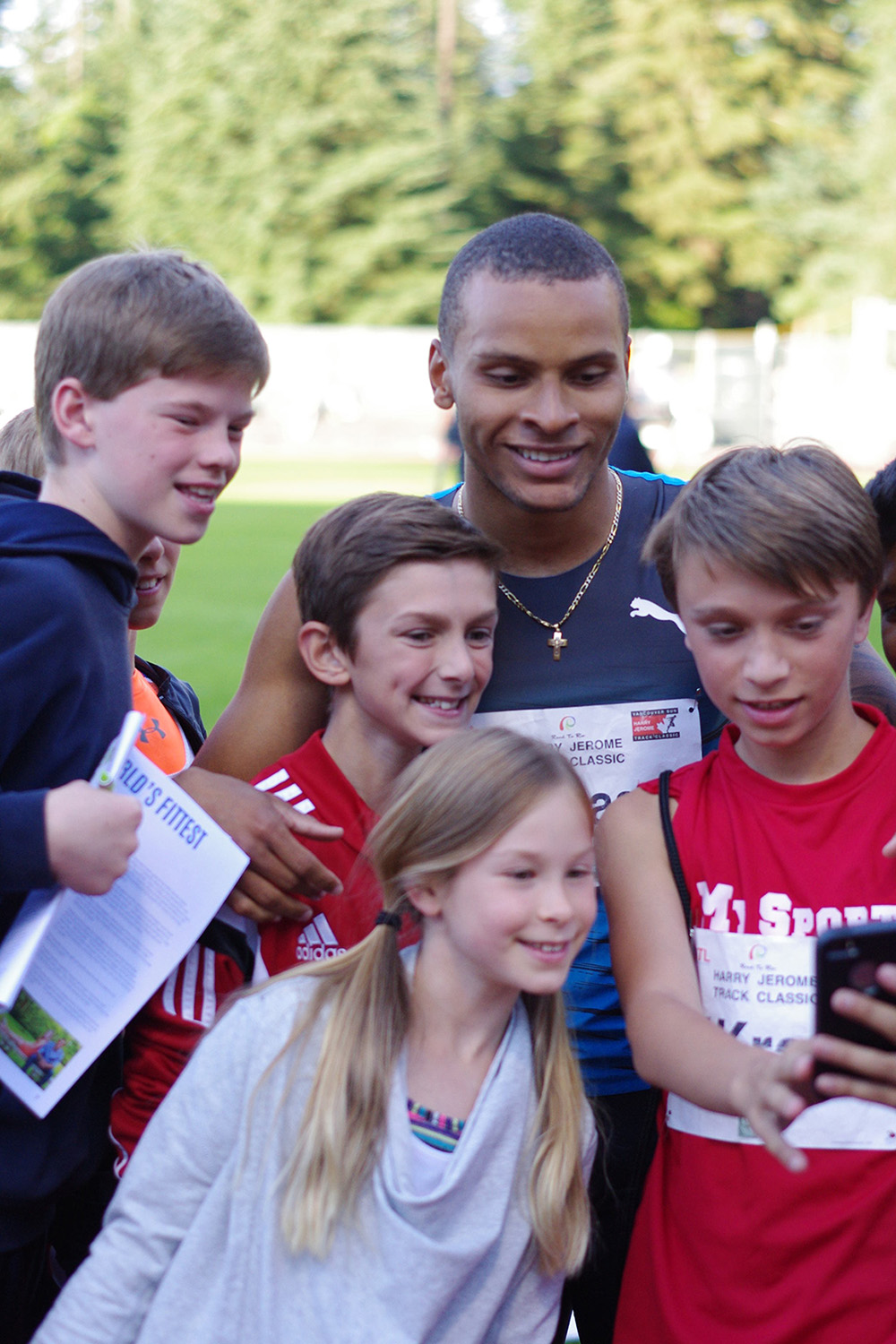