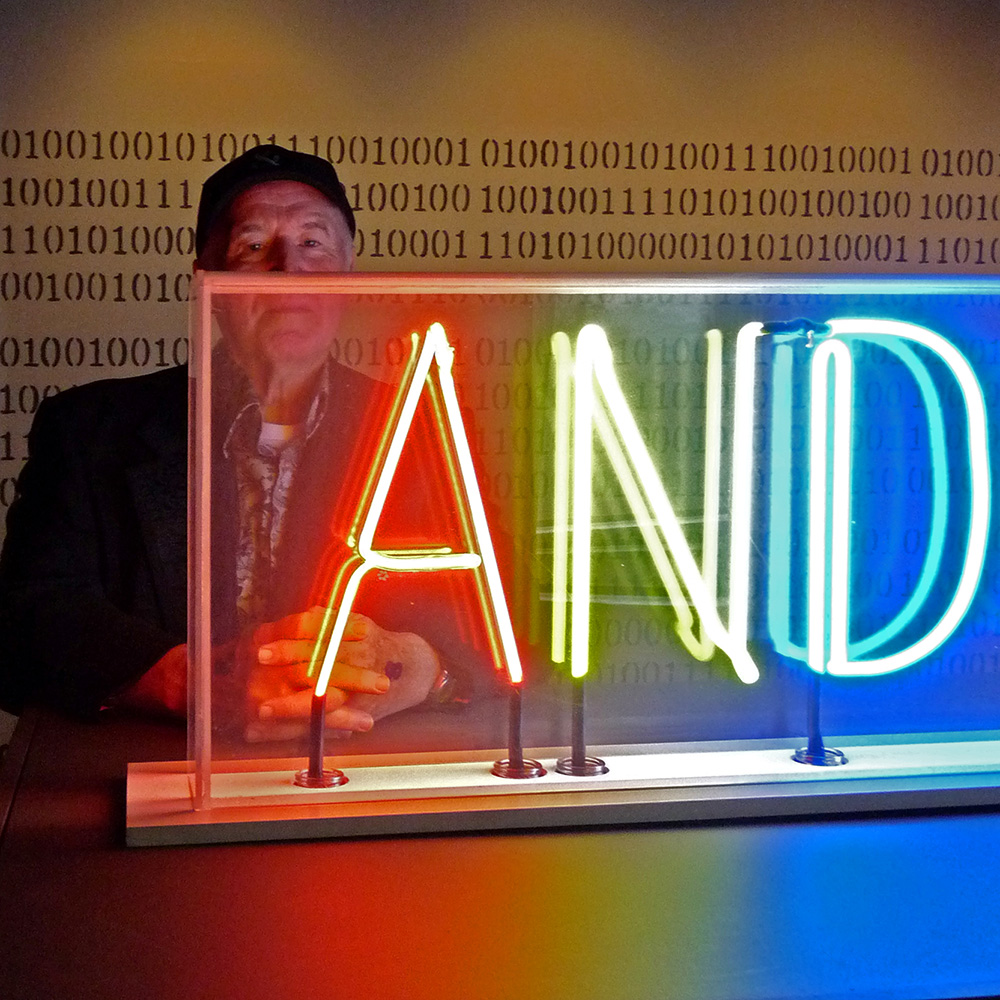 Joseph Iain Wilson Baxter (aka Iain Baxter&), OC, OOnt, OBC, artist (born 16 November 1936 in Middlesbrough, UK). An Officer of the Order of Canada and winner of the Governor General’s Award in Visual and Media Arts, Iain Baxter& is among Canada’s first and most influential conceptual artists.

Iain Baxter& emigrated to Canada with his parents in 1937, settling in Calgary. In 1947 the family moved to the West Kootenay region of British Columbia, where Baxter& took up skiing, practicing at the local resort, Red Mountain in Rossland. After moving back to Calgary in 1950, Baxter& began to ski competitively, winning medals in downhill slalom events for the Calgary Ski Club. He was selected for the Alberta Junior Ski Team. Since his grades were too low to attend university in Canada, Baxter& applied to the University of Idaho in Moscow, Idaho, with an interest in the ski team. Baxter&’s aspirations as an athlete were, however, cut short in 1955 when he was in a serious car accident.

At the University of Idaho, Baxter& initially intended to study forestry, but discouraged by difficulties in getting through the required math and physics courses, he changed to zoology. In the spring of 1957, Earl Larrison, an associate professor of zoology, noticed the unusually high quality of Baxter&’s specimen drawings and invited him to do illustrations for a guidebook, Wildlife of the Northern Rocky Mountains. Over the next few years, Baxter& did over 175 illustrations of birds, mammals and reptiles. Returning to school in the fall, he began taking art courses in watercolour and drawing. He was introduced to photography while serving as Larrison’s research assistant in the Raft River section of southern Idaho and Utah. In 1958 Baxter& had his first exhibition at the university student union building, where he showed 35 drawings and paintings (including the media of gouache, watercolour and oil). That year he graduated with a bachelor’s degree in biological sciences with a major in zoology.

While beginning a master’s degree in education at the University of Idaho in 1961, Baxter& received a Japanese Government Foreign Scholarship to spend a year in Kyoto. Taking courses at the University of Kyoto in art and aesthetic theory, he spent the year travelling extensively to temples and gardens and studying traditional Japanese painting techniques. Upon returning to Idaho in 1962, he completed his MA in education and went on to enroll in a Master of Fine Arts program at Washington State University in Pullman, Washington. For his thesis exhibition in 1964 at the Washington State University Art Gallery, Baxter& showed a series of large, two-tone abstract paintings with interlocking forms, suggesting the influence of the American artist Ellsworth Kelly.

Although Iain Baxter& began his artistic career as a painter, by 1965 he was creating plastic bas reliefs of such objects as plastic bleach, milk and detergent bottles. Bagged Place (1966), a four-room furnished apartment every part and item of which was bagged in plastic, contained psychological and sociological overtones. Collaborating with his wife Elaine (after 1971 she went by Ingrid) under the name IT, Baxter& also made a series of works out of unusual, playful materials that directly allude to and comment on some of the major artists of the era. Pneumatic Judd (1965), referencing the American minimalist sculptor Donald Judd, consists of a horizontal band of inflated vinyl with five light blue bands dangling from it. While Judd’s work typically has a refined severity, Pneumatic Judd is slightly goofy and seems closer to pop art than minimalism. Bagged Rothko (1965), referencing the work of American abstract painter Mark Rothko, has two rectangular shapes, one in inflated pink vinyl and one of white cotton flock, all wrapped in clear vinyl. While Rothko’s work characteristically aspired to the sublime, Bagged Rothko looks like something from a kitschy novelty shop. 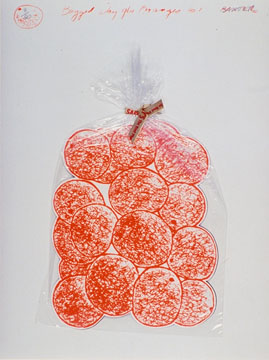 In 1966 in Vancouver, Baxter& and his wife formed the N.E. Thing Co., which was officially incorporated in 1969. The N.E. Thing Co. collaboration continued until 1978 and produced ACTs (Aesthetically Claimed Things) and ARTs (Aesthetically Rejected Things), conceptual works that dealt with ways of perceiving the environment, construction analogues, works using communication media as extensions of man and participatory pieces.

Among the influential works created under the name N.E. Thing Co. are photographic works done for light box, anticipating the work of Jeff Wall a decade later. Using Kodachrome colour transparencies set in a box and lit from behind, these pieces have a bright, glowing quality that evokes both painting and classic Hollywood cinema. The subjects of these photographs are, not surprisingly, fairly ordinary things. Still Life with 6 Trucks, Highway 1, Saskatchewan (1968) is a ground-level shot of a truck rolling down the highway, carrying the cabs of five smaller trucks in its trailer; in the background is a tilting telephone pole and the big washed-out prairie horizon and sky. Highway 1, Eastern Saskatchewan (1968) shows a bright sunburst behind drifting clouds and a line of rolling hills.

After 1978, much of Iain Baxter&’s art involved prepared photo works and mixed media, incorporating Polaroid photos, drawings, painting and sometimes objects. An uninhibited attitude toward art and a partiality for common "things" are combined with sureness of line and sometimes sensual colour in works enriched as much with ambiguity, wit and inventive play as by his persistent aesthetic questioning.

In the series Paris Beauty Spots (1980) and in the closely related Reflected Paris Beauty Spots (1980), Baxter& made use of a Polaroid camera and a large-format Polaroid camera. The first is a series of shots of classic tourist spots like the Eiffel Tower or the Louvre as seen through a circle meant to suggest a “beauty spot”; the second series places one of the Polaroids from the first series on the skin of a nude model. Reflected Paris Beauty Spots (Louvre), for instance, shows the image of the Louvre resting on the woman’s shoulder, and Reflected Paris Beauty Spots (Arc de Triomphe) has the image of the Arc de Triomphe pasted to her ribs. In the Television Works 1999-2006 series, Baxter& weds an archaic version of a popular technology with a traditional type of art. In this series, Baxter& has painted traditional landscapes in a style familiar from the Group of Seven onto the screens of old televisions.

In 2012, Iain Baxter& was the subject of a comprehensive retrospective exhibition, Iain Baxter&: Works 1958–2011, at the Art Gallery of Ontario.

One of the common “things” that has attracted Iain Baxter's attention in recent years is the ampersand symbol, and in 2005 the artist officially changed his name to Baxter&, which he describes as expressing a “non-authorial take on art production … an unending collaboration with the viewer and the means to question the artist’s role.”

Member of the Order of British Columbia (2007)

Fellow of the Royal Society of Canada (2013)