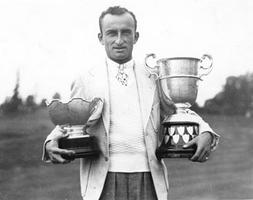 Jules Huot was the most talented in a big family of golfers who lived very close to the Royal Québec GOLF Club. Because the course was close by, he became a caddie at a young age, and in 1922, the club professional, who had complete confidence in him, made him his assistant. At that time, his main job was putting sand in the sand traps and making clubs.

In 1926, he became the professional at the Club de golf Lac Saint-Joseph in Ste-Catherine-de-la-Jacques-Cartier. The following year, at the age of 19, he was hired as the superintendent of the Kent Golf Club. In 1930, based on the club professional's suggestion, Jules Huot acquired the pro shop and became a businessman and golf pro.

At that time, when few French-Canadians made it to the highest levels of their sports, Huot started experiencing success in various tournaments, the first of which was at the Mississaugua club in 1931, where he came in second in the Canadian Open, finishing as the best Canadian professional. In 1935, he was once again the top Canadian in this important tournament. In 1932, he won the Québec Spring Open.

In the summer of 1937, Jules Huot had a historic victory in the Québec golf world. In July, P'tit Napoléon" went to Fonthill, Ontario, for the General Brock Open, an international, United Professional Golfers' Association-approved tournament, the UPGA being the precursor of the Professional Golfers' Association of America (PGA). In the second round of the tournament, he shot a 72, four strokes off leader Bob Gray's score. On the second day, Gray shot 72 while Huot had a 70, making him only two strokes off the leader. Following this second round, golfers who had shot 157 and under made the cut for the tournament. Then, during the third round, Huot broke the Lookout Point course record with a four-under-par 66. He ultimately won the tournament with a 280, two strokes better than Bill Melhorn from Louisville, Kentucky. His even-par 280 became a new standard for the General Brock tournament.

Jules P'tit Napoléon" Huot won $750 for this important victory and made the headlines of the New York Times and other newspapers across the country, making him a golfing idol.

In 1942, due to World War II, the Kent Golf Club had to close its doors. Then the Royal Québec Golf Club hired Huot. Three years later, he left the capital city area for the prestigious Club Laval-sur-le-Lac, where he remained the club professional for more than 25 years. Besides his impressive victories, Jules Huot was invited to the Masters Tournament in Augusta, Georgia, three times (1935, 1936 and 1940).

When Jules Huot died on 2 February 1999, Québec lost the man recognized as the province's greatest golf pro. In posthumous tribute, the cities of Montréal and Chicoutimi named two of their streets after him.