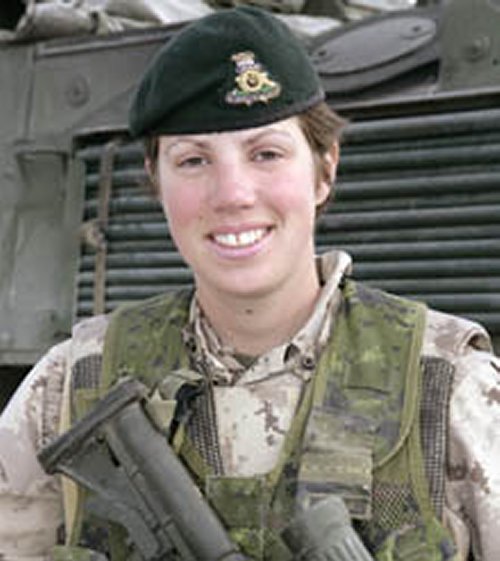 Captain Nichola Goddard, who was serving with the Princess Patricia's Canadian Light Infantry in Afghanistan, died in a military operation against Taliban forces.

Nichola Kathleen Sarah Goddard was the first of three children for British and Canadian schoolteachers Tim and Sally Goddard. Goddard’s childhood was shaped by the travels of her family. She spent the first three-and-a-half years of her life in remote villages of Papua New Guinea, where she ate local food and learned the local language. By the summer of 1984, the careers of Goddard’s parents had taken them to Black Lake, Saskatchewan, a small fly-in Indigenous community about 60 km south of the Northwest Territories. There she learned Dene, the language of her friends on the playground. By age 18, Goddard had lived in seven different communities across Canada. She attended high school in Antigonish, Nova Scotia.

Did you know?
Nichola Goddard earned the nickname “Care Bear” from her cross-country ski team in Edmonton. During a race, she threw away a solid lead to help a teammate who was suffering an asthma attack.

Nichola Goddard chose the military in her senior year of high school in 1997. Sally Goddard recalls that “free education and a job for five years after graduation” factored heavily in her daughter’s decision.

After graduating high school, she flew to Montreal for a Basic Officers Training Course (BOTC) at the Saint-Jean Garrison in Saint-Jean-sur-Richelieu. She then completed four years at the Royal Military College in Kingston, Ontario. She graduated as a trained artillery officer and was posted to the 1st Regiment Royal Canadian Horse Artillery (1RCHA) as a 2nd Lieutenant.

Goddard’s early years in the armed forces involved fighting wildfires and avalanche control in British Columbia. She was later promoted to captain.

Those who served with Goddard, remember her as someone who quickly earned the respect of her comrades. Her former commanding officer, Ret. Lt. Col. Anne Reiffenstein, later remarked on the strong bond Goddard formed with non-commissioned members of the regiment. After Goddard made a mistake during a training exercise, Reiffenstein disciplined her by assigning additional duties. As she remembers, “It was like I had kicked puppies. I had every senior NCO (Non-commissioned Officer) come to me and complain for two-and-a-half days… They believed she was there for them and they were there for her.”

Goddard deployed to Afghanistan in January 2006 as a forward observation officer (FOO) attached to the Princess Patricia’s Canadian Light Infantry (1PPCLI). As the leader of a forward observation party (FOO team) within the artillery, her job was to call in indirect fire from artillery guns. FOO teams also coordinate airstrikes from jets and attack helicopters. The FOO team rides in a Light Armoured Vehicle (LAV), a 17-tonne, eight-wheeled vehicle with a rotating chain gun.

On 17 May 2006, Nichola Goddard and over 200 Canadian and Afghan soldiers were tasked to sweep an area south of Kandahar in the Panjwayi district. The mission was to root out an element of the Taliban that was gathering in the area.

Goddard and her team were ambushed by militants as they moved into a mosque in the Paanjwayi district. As the commanding officer, Goddard was standing in the turret of the LAV, with her head and shoulders exposed. Numerous rocket-propelled grenades hit their vehicle. Shrapnel struck Goddard in the back of the head, killing her instantly. She was 26 years old when she died.

Capt. Nichola Goddard was the first female Canadian soldier to die in a combat role and the highest-ranking soldier to die since Canada arrived in Afghanistan. She was the 16th Canadian to die in that conflict.

Goddard’s family arranged a public funeral at St. Barnabas Anglican Church in Calgary on 26 May 2006. She is buried in the National Military Cemetery at Beechwood in Ottawa.

Goddard was posthumously awarded the Meritorious Service Medal on 27 October 2006.

Nichola Goddard’s death in 2006 shocked the country. Many Canadians at the time believed that military combat was a job for men. The death of a female soldier was therefore newsworthy. Indeed, Goddard’s life and death received more media attention than any of the other 158 soldiers who were killed in Afghanistan. According to her family and friends, Goddard despised gender stereotypes and viewed herself as an equal among her male counterparts. Her story revealed that women were on the front lines putting their lives at risk and moving up the ranks.