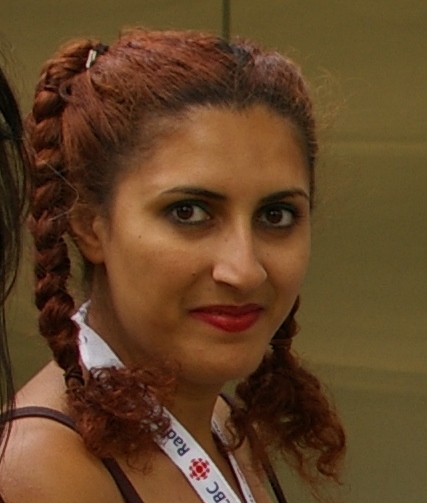 Priscila Uppal at the 2009 WestFest in Ottawa.

Priscila Uppal’s poetry charts the violence and injustice of the contemporary world. Her voice characteristically blends the absurd and the serious, using startling wit to provoke her audience. Her first collection, How to Draw Blood from a Stone, was released in 1998, and was followed by Confessions of a Fertility Expert (1999), Pretending to Die (2001, shortlisted for a ReLit Award for Poetry), and Live Coverage (2003). In 2005, she released Holocaust Dream with photographer Daniel Ehrenworth, a meditation on the horror of Auschwitz.

Ontological Necessities (2006) was shortlisted for the 2007 Griffin Poetry Prize. Within this collection, Uppal questions personal identity and the complexities of human relationships, exploring these themes through the lens of a surreal world. Uppal's sixth major collection, Traumatology (2010), scrutinizes the different aspects of self — physical, mental and spiritual — and our definitions of those selves. With strong images and wit, Uppal pushes the standard limits of questioning the world. A selection of her poems, Successful Tragedies: Poems 1998-2010, was published in 2010.

Uppal also released two novels. Her first, The Divine Economy of Salvation (2002), explores the ways in which childhood sins can taint and overshadow one’s later life. This disturbing yet beautiful work follows the life of a woman who, in anguish over her past, seeks to find refuge by entering a convent. Her past, however, refuses to remain hidden.

To Whom It May Concern (2009) follows the life of a disabled man struggling to keep his world from falling to pieces. The novel is a powerful and unpredictable retelling of King Lear that draws upon both the tragicomedy of betrayal and love.

Uppal also authored an academic work, We Are What We Mourn: The Contemporary English-Canadian Elegy (2009), and edited or co-edited several anthologies, including Red Silk: An Anthology of South Asian Canadian Women Poets (2004), The Exile Book of Poetry in Translation: 20 Canadian Poets Take on the World (2009), and collections of essays on both Barry Callaghan and Matt Cohen.

Uppal’s acclaimed memoir, Projection: Encounters with my Runaway Mother (2013), recounts her experience of reuniting with her mother for the first time after she abandoned her family. It was shortlisted for the Governor General’s Literary Award for nonfiction and the Hilary Weston Writers’ Trust Prize for Nonfiction (see also Hilary M. Weston). Her 2017 play, What Linda Said, was based on her relationship with actor Linda Griffiths, who died of cancer around the same time that Uppal was diagnosed with the disease.

She was the Canadian Athletes Now Fund poet-in-residence for the 2010 Vancouver Winter Olympics and Paralympics, and for the 2012 Summer Olympic Games in London, England. She released Winter Sport: Poems in October 2010 (see also Sport Literature). TimeOut London dubbed her “Canada’s coolest poet.” Uppal was also a member of the Board of Directors for the Toronto Arts Council. Her works have been translated into a number of languages, including Croatian, Dutch, Greek, Korean, Italian and Latvian. She was named a Fellow of the Royal Society of Canada in 2016.

Uppal was diagnosed with synovial sarcoma, a rare and aggressive form of cancer, in 2015. She spoke openly about her experience with the disease — she called it the “Kick In Your Face cancer” — and wrote about it in poetry and essays. Following her death in 2018 at the age of 43, John Degen, executive director of the Writers’ Union of Canada, said, “I deeply admired her openness and kindness to others in the business. Her generosity with other writers will likely be referenced again and again in tribute, because she was all generosity. We’ve lost an irreplaceable artist.”