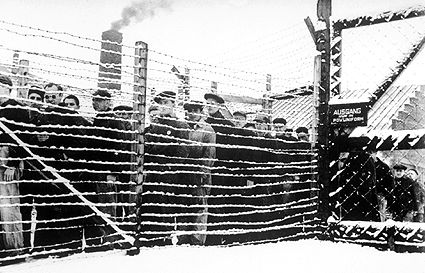 Canada operated prison camps for interned civilians during the First and Second World Wars, and for 34,000 combatant German prisoners of war (POWs) during the Second World War. The POW camps at Lethbridge and Medicine Hat, Alberta, were the largest in North America.

The first camp for civilians interned during the First World War opened on 18 August 1914. In the previous decades, many immigrants had come to Canada seeking land, freedom and exemption from military service. After the outbreak of war, many civilians with links to Germany, Turkey and the Austro-Hungarian Empire (including Ukraine and other parts of central Europe) were arrested and vetted as possible threats to Canadian security. Males of military age were often placed in work camp facilities on the Prairies, or in internment sites such as Fort Henry, in Kingston, Ontario.

The largest camp in the West was located in Alberta — in summertime, at the base of Castle Mountain, and in wintertime at Banff, AB. A similar, smaller site was located in Jasper, AB. Internees at these Rocky Mountain camps laboured for 25 cents a day, improving national park facilities or clearing brush to prevent fires from steam locomotive sparks along the railway. Other smaller camps existed in British Columbia and Ontario. Two camps — in Vernon, BC, and Spirit Lake, Québec, even held several dozen families. Although women and children were not directly interned, in many cases they had no choice but to accompany husbands and fathers who were forced into the camps. Women and children were not expected to work.

Of 8,579 men at 24 camps across Canada, 5,954 were of Austro-Hungarian origin including 5,000 Ukrainians; 2,009 were German; 205 were Turks and 99 were Bulgarians. By the end of 1917 most of the civilian camps were closed, largely because of the labour shortage in Canada. With much of the country's male workforce serving in the military, the country was desperate for men who could work in industry and agriculture (see also Internment).

From the mid-1930s, the Royal Canadian Mounted Police (RCMP) kept many so-called "suspicious" civilians under surveillance. With the outbreak of the Second World War in 1939, the War Measures Act was passed, and several thousand civilians were interned in holding camps in New Brunswick, Québec, Ontario and Alberta. Those interned included Germans and Italians suspected of spying, subversion — or of simply having fascist sympathies.

The first camp opened on 29 September 1939 in the Kananaskis area of Alberta at the base of Barrier Mountain. Eventually, three different facilities were built in Kananaskis including one for conscientious objectors — Canadians who refused government orders to go to war — located near the Seebe power plant at the junction of the Bow and Kananaskis Rivers. 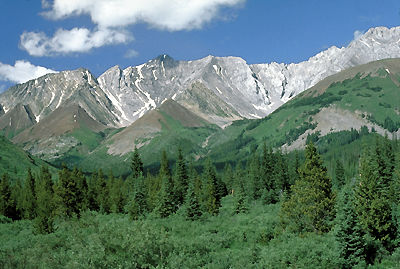 As German forces swept across western Europe in 1940, thousands of refugees sought safety in Britain. The British government, worried about its own survival, vetted both refugees and British residents in an effort to protect Britain against saboteurs. Some of these persons were shipped to Canada for internment at a civilian camp in Ripples, New Brunswick, near Fredericton. In 1942, Ripples received more male civilians transferred from the Kananaskis-Seebe camp in Alberta.

More than 20,000 Japanese Canadians — including whole families — were also either interned during the war, or removed from their homes on the Pacific coast and housed in rudimentary settlements in more isolated areas, with their activities restricted (see also Japanese Internment).

In 1942, after the Allied defeat of German forces in North Africa, 10,000 German POWs were shipped from Cairo, Egypt, to New York, transferred to the Canadian Pacific Railway and moved to Ozada camp on the Alberta prairie. Prisoners were sheltered temporarily under canvas until two large camps were built at Lethbridge and Medicine Hat. In time, these two camps held 12,500 prisoners each. Smaller camps housed POWs in other provinces.

All POWs were legally protected under the terms of the Geneva Convention, and were adequately provisioned and housed as required by the Convention. Canadians living near the camps believed the POWs received better food than they themselves enjoyed under wartime rationing. Veterans Guards, and later, the Canadian Army soldiers who guarded the camps, had the same provisions but said the POWs had better cooks and more time to prepare meals.

The Veterans Guards were mainly veterans from the First World War who were considered too old to serve overseas in the Second World War. The camp guards had only rifles, no machine guns. They served not only at the POW camps, but at a variety of military installations and factories across the country considered important to the war effort.

Most of the prisoners were far younger and in better physical condition than their guards. Escapes were attempted, often as a “game” to help relieve boredom. A few prisoners succeeded in escaping for a time — but all were recaptured except one.

In January 1941, POW Franz von Werra — a celebrated German fighter pilot ace captured by the British in 1940 — jumped from a train carrying him and other POWs in Ontario. Von Werra crossed the St. Lawrence River into New York State and managed to return to Germany via Mexico and South America. Upon his return, von Werra was decorated by Hitler personally. He rejoined the Luftwaffe and died in October 1941, when his plane crashed into the North Sea off the Netherlands.

Hard-core Nazi POWs were usually selected out from the general POW population in the camps and sent to the Medicine Hat camp. In 1943 and 1944, two POWs were murdered by fellow prisoners, on orders from the prisoners' internal Nazi "leadership." Investigations by the RCMP resulted in the eventual arrests of several German prisoners, who were subsequently transferred to Northern Ontario lumber camps. Six prisoners were returned to the Medicine Hat civilian courthouse for trial, and in due course five were hanged in the Lethbridge provincial jail in 1946.

At least 137 combatant prisoners died in Canadian custody between 1939 and 1946, including the five who were hanged. Most died of natural causes such as cancer. However, a suspicious number of deaths were the result of falling trees in timber operations being worked by POWs in Ontario. In 1971, all remains of the POWs who died in Canada were moved — at the request of the German War Graves Commission — to the German War Graves Section in a Kitchener, Ontario, cemetery. The remains were buried with appropriate ceremony, two-to-a-grave with a suitable granite headstone. The site was chosen because it was considered easily accessible to German relatives living in Europe, who might want to visit the graves of loved ones in Canada. Kitchener also has a large population with German ancestry.

More than 34,000 combatant German POWs were held in Canada during the Second World War. The camps in Medicine Hat and Lethbridge were the largest in North America, vastly outstripping the largest camp in the United States, which held 15,000 POWs by comparison.

Once captured, all combatant prisoners were held in Canada under the supervision of the British government. Most were returned to partitioned Germany following the war. However, over the years many immigrated back to Canada — the former prisoners returning with their families to show their relatives how well they were treated by their Canadian captors in their temporary home away from home.