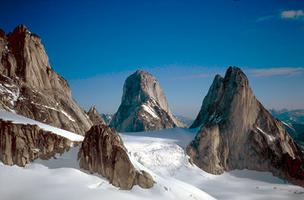 The Purcell Mountains are an interior mountain range in British Columbia. They are located in the southeastern part of the province, between the Rocky Mountain Trench to the east, Kootenay Lake to the west and the Trans-Canada Highway to the north and extend beyond the Canada–U.S. border to the south.

The Purcell Mountains are generally 300 to 600 m lower than the Rockies, with the higher heights in the centre of the range. The highest peaks are Mount Farnham (3,481 m), Mount Jumbo (3,429 m), Howser Spire and Mount Delphine (both at 3,399 m). Summit heights gradually diminish to the south, where they become rounded and forested. A subrange of the Columbia Mountains, the Purcell Mountains are composed mainly of sedimentary rock, including sandstone and limestone, dating to almost 1.5 billion years ago. Of great interest to mountain climbers are the numerous granitic intrusions, such as the Bugaboos and the Leaning Towers.

The Kootenay River and its tributaries drain the mountain range. Within Canada, the river’s westward flowing tributaries have short, steep courses, while the eastward flowing rivers have longer, more gradual gradients. In the United States, the Kootenay flows around the southern edge of the mountains before heading in a northwesterly course to Kootenay Lake.

The region is the homeland of the Ktunaxa. David Thompson established the short-lived Kootenae House near present-day Invermere in 1807 to trade with them. The Palliser Expedition explored the area from 1857 to 1860 and, in 1859, Dr. James Hector named the mountains after Dr. Goodwin Purcell, who served on the expedition’s selection committee. One of the first European settlements in the region, Fort Steele, was built in 1864 during the Wild Horse Creek gold rush. Kimberley was founded after the world’s largest lead and zinc mine was claimed in 1892. After a branch line of the Canadian Pacific Railway was built through the Crowsnest Pass, Cranbrook, home to a saw and pulp mill, grew to become the largest community in the area at the time. Creston is a railway and agricultural centre. Invermere is known for its recreational activities.