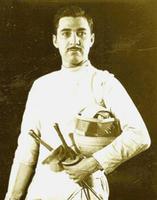 Robert Desjarlais, athlete, fencer, teacher (b at Saint-David, Que, 26 Aug 1907; d at Montréal 17 Jul 1987). Since his classical studies at Collège Saint-Laurent, young Desjarlais had a passion for "cloak and dagger" novels. The genre attracted him so much that in the late 1920s, along with few friends, he formed a FENCING club called Les Quatre Mousquetaires.

Although it was an amateur club in the fullest sense of the word, things became more serious-minded when the lessons and training revolved around Robert Desjarlais. The readings, the work, the discipline, and the advent of new friends sharing the same passion increasingly led Les Quatre Mousquetaires to organize themselves as a genuine sports club. The instructor rented a hall, at first on rue Université and then on rue St-Denis in Montréal, and the efforts bore fruit when Desjarlais won the novice fencing foil championship in 1939.

During the watershed decade of 1930-1940, the practice of fencing was developing rapidly; the club was packed and the available space was inadequate. In late 1943, looking for ways to respond to the upsurge of amateurs, the instructor managed to convince the directors of the Palestre Nationale to establish a fencing club. Besides teaching in this shrine of French-Canadian amateur sport, Desjarlais continued his battle with determination to such a degree that in 1946, he won the title of Québec champion in foil and sabre. So complete was his commitment that at the end of that year he was elected president of the former Quebec Fencing Association - now the Fédération d'escrime du Québec.

Two years later, in 1948, Desjarlais took part in the OLYMPIC GAMES in London, as an athlete, manager, and coach of the fencing team. His time in London was very busy, for in addition to his multiple functions with the Canadian team, he was president of the Canadian Federation and represented Canada in the International Fencing Federation. A key figure in Canadian fencing, Desjarlais was required to attend all the meetings held regarding the Olympics.

The following year, Desjarlais again won the provincial foil championship and earned the silver medal at the national level. This second place win took him to New Zealand the following February for the Empire Games (now the COMMONWEALTH GAMES). After the Games, he was part of a Canadian delegation that travelled in New Zealand and Australia for 4 months to present sporting competitions.

On his return, Desjarlais continued teaching at the Palestre Nationale's fencing hall. He gradually retired from competition and devoted more of his time to coaching. In 1954, he thus held the positions of co-trainer and competition armourer at the Empire Games in Vancouver. At this international competition, there were no less than 7 fencers on the Canadian team from the Palestre Nationale, among them Carl Schwende, rightly considered the father of the Québec Sports Hall of Fame.

After returning from western Canada, Desjarlais founded the Académie des Armes du Québec. This organization aimed to raise the level of fencing while advocating its educational value and sportsmanship. He also ensured the training of fencing coaches - future Fencing Masters - taking care to protect the public from the influence of incompetent and unqualified instructors.

Having by this time ended his career as an athlete, Desjarlais took on the responsibility for all the activities in the Palestre Nationale fencing hall from 1958 to 1966, and during this period, he made it a mecca for fencing in Canada. Then, in 1967, he was asked to collaborate in organizing World Fencing Championships held in Montréal. He also worked with the Commonwealth Fencing Federation and the Fédération d'escrime du Québec.

During the course of his career, Desjaralais divided his time between arms rooms and classrooms, actively participating in Québec's cultural life. He was a lecturer at the Université de Montréal and at Université Laval and taught at the Conservatoire d'Arts dramatiques in both Québec City and Montréal. Doing so, he revived his teenaged dreams, orchestrating arms performances on stage and television, among them King Lear, Romeo and Juliette and Cyrano de Bergerac. Robert Desjarlais reconciled the practice of sports and the arts in exemplary fashion, and demonstrated that sports occupy a cultural dimension in society.

In 1974, Robert Desjarlais was inducted into the Québec Amateur Sports Hall of Fame. Four years later, he received the Baron-de-Coubertin trophy, and in 2008 he entered the Panthéon de l'escrime québécois (Quebec Fencing Hall of Fame) as a builder.