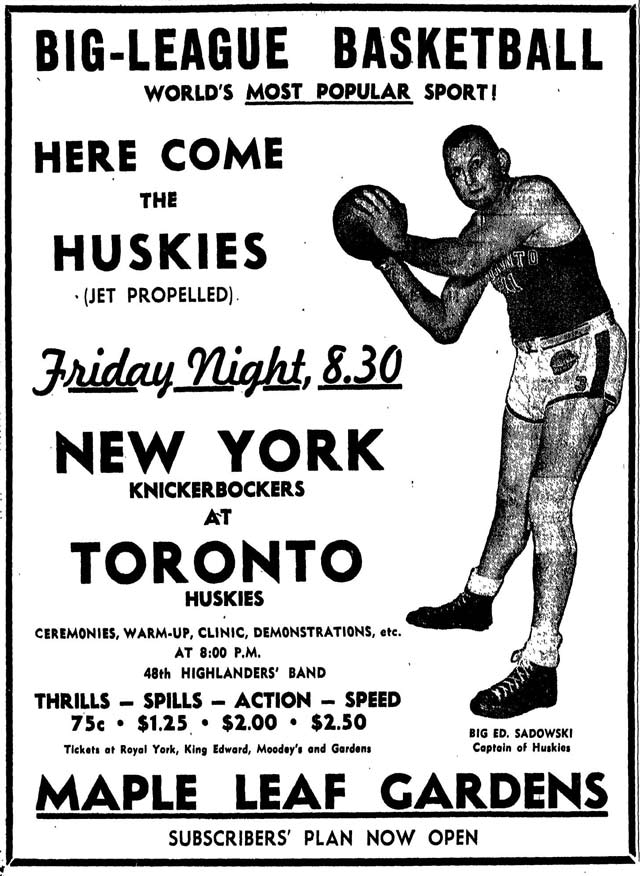 An advertisement for the BAA/NBA’s first game on 1 November 1946, played at Maple Leaf Gardens between the Toronto Huskies and the New York Knickerbockers. Ad features Ed Sadowski, the captain of the Huskies. It appeared in the Toronto Daily Star on 31 October 1946.

November 1946 was a hectic month in the Toronto sports calendar.

Six games into the National Hockey League season, the Toronto Maple Leafs were in first place in their division. The Toronto Argonauts’ season was in full swing with just a pair of games against the Montreal Alouettes remaining before the Canadian Football League playoffs began. By the end of the month, they’d capture the 34th Grey Cup at nearby Varsity Stadium on the campus of the University of Toronto.

On 1 November, a crowd of 7,090 filed into Maple Leaf Gardens to watch Canada’s first professional basketball game. The iconic arena was home to the Toronto Maple Leafs hockey team and had hosted a wide range of events since it opened in 1931 — everything from wrestling and championship boxing matches to a 1941 address from Winston Churchill. But on this day, it opened its doors to Toronto’s newest professional sports team, the Huskies, and the inaugural match of the the Basketball Association of America (BAA).

Birth of the Huskies and the BAA

The Toronto Huskies was one of the 11 founding teams of the Basketball Association of America (BAA). The BAA was born out of a meeting on 6 June 1946 at the Hotel Commodore in New York City between a group of prospective owners from the Arena Association of America. The men operated venues in cities along North America’s eastern corridor, including New York, Philadelphia, Boston, Chicago, and Detroit. Toronto’s delegate, Frank Selke Jr., represented Maple Leaf Gardens and an ownership group that included local businessmen Eric Cradock, Harold S. Shannon, and Ben Newman. These arenas regularly hosted hockey games, and several, like Toronto, were home to NHL teams. The ties to hockey didn’t end there; the BAA’s first president, Maurice Podoloff, was also president of the American Hockey League.

With the exception of Knicks founder Ned Irish, who had hosted college basketball events at Madison Square Garden since 1934, most of these men knew little about basketball. Their primary motivation seems to have been a desire to fill the seats of their arenas when hockey games weren’t being played. Basketball had grown steadily in popularity since its invention by Canadian-born James Naismith in 1891. With origins in the gymnasium at Springfield College in Springfield, Massachusetts, the sport had spread to college campuses across the United States, and collegiate crowds showed their support. Professional leagues had emerged, too, with teams in places like Wilmington, Delaware, and Fort Wayne, Indiana.

Given the success of these leagues, the arena owners aimed to bring pro basketball to larger metropolises in order to capitalize on its potential as a form of live entertainment. By the time their meeting ended, they had agreed to an ambitious plan to launch an 11-team league in less than five months.

Maple Leaf Gardens was selected to host the new league’s first game on 1 November 1946, with the hometown Huskies facing the New York Knickerbockers.

With opening tip fast approaching, the Huskies had to quickly fill out their roster. The team was built around Ed Sadowski, a collegiate star at Seton Hall in New Jersey, who was also named Toronto’s head coach. Sadowski was responsible for player recruitment and relied heavily on American players. The Huskies’ roster included only two Canadians, Gino Savron and Hank Biasatti, both of Windsor, Ontario. Born in Beano, Italy, in 1922 and raised in Windsor, Biasatti was a standout athlete at Assumption University (which later became the University of Windsor) and is considered the first international player in the NBA. He played both basketball and baseball and was a first basemen in Canada’s Intercounty Baseball League prior to joining the Huskies. (He returned to baseball following his time with the Huskies, playing for Major League Baseball’s Philadelphia Athletics.)

The Huskies held training camp in October 1946 at St. Jerome’s College in Kitchener, Ontario. As the inaugural game neared, they moved their practices to the Central YMCA in Toronto. At Maple Leaf Gardens, crews struggled to transform the arena from an ice hockey rink into a basketball court. Early attempts resulted in condensation rising from the ice to the wood floor placed on top, creating slippery conditions. The hockey boards that normally lined the rink remained up and surrounded the court during the game.

Meanwhile, promoters were hard at work trying to sell a new sport to Canadian fans. Advertisements in local newspapers, some three columns wide, promised the arrival of “big-time basketball” and labelled it the “world’s most popular sport!” One ad read, “Can you top this?” and showed a photo of the Huskies’ tallest player, George Nostrand, alongside a notice that “Anyone Taller Than NOSTRAND 6 ft. 10 Inches Will Be Admitted Free to OPENING GAME.” Other posters featured player-coach “Big” Ed Sadowski and billed the Huskies as “Jet Propelled,” while fans were promised “Thrills, Spills, Action, and Speed.” Tickets were priced between 75 cents and $2.50 apiece. 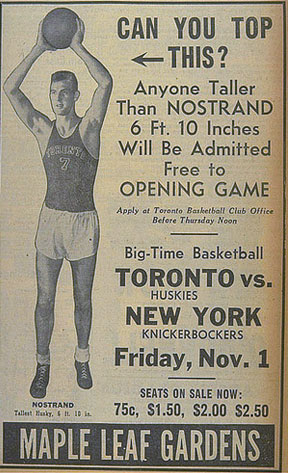 An advertisement for the BAA/NBA’s first game on 1 November 1946, played at Maple Leaf Gardens between the Toronto Huskies and the New York Knickerbockers. Anyone taller than Toronto player George Nostrand could watch the game for free. Ad appeared in the Toronto Daily Star on 30 October 1946.

Despite these promotions, the upcoming game didn’t create much of a buzz. When the New York Knicks arrived at the Canadian border, no one seemed to know who they were. In a story retold by Sam Goldaper in the NBA Encyclopedia, the Knicks were met by Canadian customs officials at the border, who eyed the collection of abnormally tall men and asked, “What are you?”

“We’re the New York Knicks,” head coach Neil Cohalan answered. Puzzled, the customs official said he was familiar with the New York Rangers, one of the National Hockey League’s original franchises. “Are you anything like that?”

Cohalan patiently explained that the Knicks played a different sport called basketball. “I don’t imagine you’ll find many people up this way who’ll understand your game — or have an interest in it,” he was told.

The game’s first basket was scored by the Knicks’ Ossie Schectman, a Jewish-American born in Queens, New York, who has since been immortalized as the first player to score a point in the NBA.

The Knicks ran out to an early 6–0 start and led by as many as 15 points before Sadowski helped cut the lead to eight at halftime. However, the Huskies’ player-coach committed his fifth foul in the third quarter — the maximum number of fouls one could commit before being ejected from the game. He was replaced by Nostrand, famously the team’s tallest player, who helped spark a comeback and Toronto led 48–44 heading into the fourth and final quarter. After a heated final frame, the Knicks emerged on top, 68–66.

The game looked fundamentally different than the one basketball fans are used to today. There were no three-point line and no shot clock, which restricts each possession to 24 seconds. As a result, the game, close as it was, featured far less scoring than today’s games.

Despite his limited playing time, Sadowski led all scorers with 18 points, followed closely by Nostrand’s 16. Leo Gottlieb paced the Knicks in scoring with 14 points, while Schectman chipped in 11 points of his own.

"It was interesting playing before Canadians," recalled Knicks captain Sonny Hertzberg. "The fans really didn't understand the game at first. To them, a jump ball was like a face-off in hockey. But they started to catch on and seemed to like the action."

Demise of the Huskies

However, neither the Huskies nor the BAA really caught on in Toronto. Several players, including Sadowski and Biasatti, left the Huskies partway through the season, and the team finished the BAA’s inaugural campaign with a record of 22–38, tying with the Boston Celtics for last place in the Eastern Division.

After just one season in operation and a reported $100,000 in losses for its owners, the Huskies franchise folded.

Although the Huskies lasted only one season, their game against the Knicks was a pivotal moment for professional basketball. The BAA, once it was rebranded as the NBA in 1949, went on to massive success, becoming one of the most popular sports leagues in the world.

However, it wasn’t until nearly 50 years later that Canada would boast another professional basketball team. In 1995–96, the Toronto Raptors and Vancouver Grizzlies played their inaugural seasons. While the Grizzlies were relocated to Memphis, Tennessee in 2001, the Raptors have established a foothold in Toronto and remain Canada’s lone NBA franchise. In 2009, the team paid homage to its roots and unveiled Toronto Huskies uniforms. The club wore the Huskies uniforms six times during the 2009–10 season, including in a game against the Knicks on 5 March 2010.