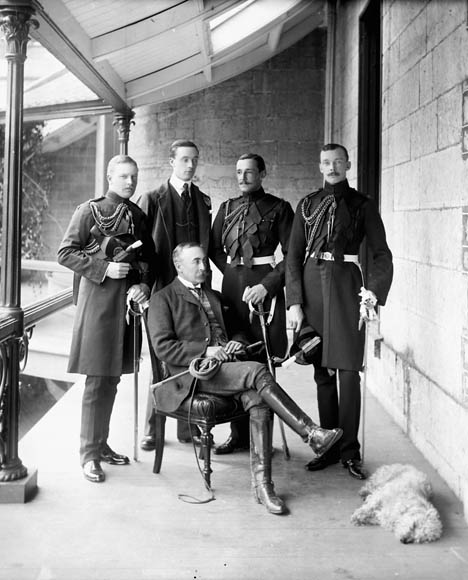 Gilbert was the eldest of the four sons of Scottish landowner and Member of Parliament William Hugh Murray-Kynynmound Eliot, Viscount Melgund, and Emma Hislop. Gilbert received his early schooling at home from his mother, who was the author of a series of family histories and biographies. He attended Eton College for his secondary education from 1859 to 1863. He attended Trinity College Cambridge from 1864 to 1867. He received an honorary doctorate from Cambridge in 1910.

In 1859, upon the death of his paternal grandfather, the 2nd Earl of Minto, Gilbert inherited the courtesy title of Viscount Melgund from his father. Following the example of previous generations in his family, Melgund pursued a military career in the British Empire. He served in the Second Afghan War in 1878–79 and was wounded during the British occupation of Egypt in 1882.

Following their marriage, Viscount and Viscountess Melgund moved to Canada because Melgund had been offered a post as military secretary to Lord Lansdowne, governor general of Canada, in 1883. Melgund and Lansdowne were old friends and had gone to school together. The Melgunds resided at Rideau Cottage, now the home of the prime minister. The couple travelled extensively in eastern Canada and enjoyed skating and salmon fishing. Their eldest daughter, Eileen, was born in Ottawa and nicknamed “La petite Canadienne” by Prime Minister Sir John A. Macdonald. Melgund’s duties included recruiting a small Canadian force of “voyageur” boatmen in efforts to relieve the 1884 Siege of Khartoum (now capital of Sudan). This was the first British imperial conflict where Canada participated as a self-governing Dominion. Melgund later served as chief of staff to General Frederick Middleton, the officer who commanded the Canadian militia during the North-West Rebellion of 1885.

Macdonald admired Melgund and reputedly predicted, “I shall not live to see it, but some day Canada will welcome you back as governor general.”

Appointment as Governor General of Canada

On 17 March 1891, Viscount Melgund succeeded his father as the Earl of Minto. He aspired to a political career, but his efforts to run for Parliament were unsuccessful. Instead, he devoted his time to managing his family’s Scottish estates. He campaigned quietly for the role of governor general of Canada, writing in his journal in March 1898, “The post is vacant in the autumn — told [Lord Wolseley at the British War Office] I did not wish to ask for it — but that if he could let it be known I should be willing to accept if offered.” George Stephen, a Canadian banker and businessman who had been president of the Canadian Pacific Railway from 1881 to 1888, recommended Minto for the position. The Earl received the appointment and arrived in Canada with his wife and their five young children in November 1898.

The Mintos introduced greater formality at Rideau Hall functions and limited the number of guests who were invited to official occasions. Minto acquired a popular reputation for being overly concerned with protocol and maintaining a narrow social circle.

Minto considered Rideau Hall to be an inadequate residence for the governor general and favoured offering the building to the National Gallery of Canada, which needed a permanent home for its collection. He commissioned the building of the Minto Wing at the east end of Rideau Hall to provide temporary accommodation for his children and household until the governor general received a new residence. The Minto Wing was damaged by a fire in 1904.

The Boer War and the Military

Another controversy was whether Canadians should serve under British officers. Although Minto was associated with this position, he supported Canadians serving in their own contingents. Minto took a strong interest in the development of the Canadian military and was appointed honorary lieutenant-colonel of the Governor General’s Foot Guards, a tradition that continues to the present day.

Prime Minister Sir Wilfrid Laurier compromised in the Boer War by allowing a volunteer contingent of more than 7,000 Canadians, equipped at their own expense, to participate in the conflict. The Boer War controversy strained the working relationship between Minto and Laurier, but their rapport improved after the conflict and Laurier observed that Minto “took his duties to heart.”

In 1900, Lord and Lady Minto undertook an extensive tour of Canada’s western provinces and became the first viceregal couple to visit the Yukon. Minto described the tour in his journal as “a wonderful experience.” As he noted, “There seems to have been an idea that we would hold ourselves aloof, and refuse generally to meet all classes or interchange ideas. We have done our best to see everyone and do everything that time allowed.”

The Klondike Gold Rush took place during Minto’s term as governor general. Minto was critical of Canada’s governance of the Yukon based on his observations in Dawson City, which had a population of about 17,000 at the time. Minto wrote to Chamberlain, “The Dominion Govt. seem to have looked upon the Yukon as a source of revenue, as a place to make as much out of as they could, & have used the proceeds largely for political corruption instead of for the development of the country….” Minto urged reforms to the systems of liquor licensing and royalties on gold dust and increased investment in infrastructure and services in the Yukon.

Both Lord and Lady Minto were accomplished skaters, and they founded the Minto Skating Club in Ottawa in 1903. In the summers, Minto enjoyed bicycling and lacrosse. In 1901, Minto established the Minto Cup Canadian Lacrosse Association Championship Award, which is awarded annually to the championship winning junior men’s lacrosse team.

Minto was a friend of U.S. president Theodore Roosevelt and shared Roosevelt’s interest in developing national parks, encouraging a similar program for Canada. Minto also had a strong interest in Canadian history and supported the establishment of a centralized National Archives of Canada. Lord and Lady Minto were concerned about the spread of tuberculosis in Canada and founded the country’s first anti-tuberculosis foundation, funding hospitals across the country.

In 1901, Lord and Lady Minto hosted the Duke and Duchess of Cornwall and York (the future King George V and Queen Mary) during their cross-country tour of Canada. The royal couple was accompanied by the Duchess’s brother, the future Earl of Athlone, governor general of Canada from 1940 to 1946. Minto hosted the royal party at Rideau Hall, arranging a lacrosse match for the Minto Cup at the Duke’s request. Minto accompanied the royal party for part of the tour, including public engagements in Ontario and Quebec and duck hunting in Manitoba.

Lord and Lady Minto maintained their warm relationship with the royal family and attended the coronation of Edward VII on 9 August 1902. Minto was made a privy councillor as part of the coronation honours awarded by the new king.

Like the Earl of Dufferin and Marquess of Lansdowne, Minto was appointed viceroy of India following his term as governor general of Canada. As viceroy from 1905 to 1910, Minto introduced political reforms, such as the inclusion of an Indian representative on his council. The Earl and Countess of Minto returned to the United Kingdom in 1910. Minto was diagnosed with colon cancer in 1913 and died at Minto Castle the following year.

Lady Minto commissioned a biography of her late husband, which was written by John Buchan, future Baron Tweedsmuir, governor general of Canada from 1935 to 1940.

There are numerous places in Canada named after Minto, including Minto Place in Ottawa, Minto Street in Toronto, Minto City and Mount Minto in British Columbia, and the towns of Minto, Ontario and Minto, New Brunswick.