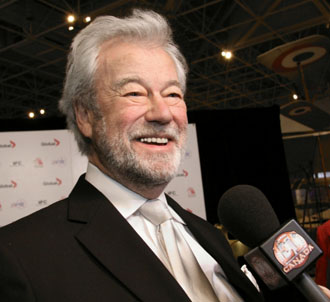 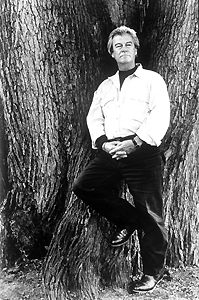 Pinsent is responsible for the screenplays of many of his own best roles (photo by Heather Graham). 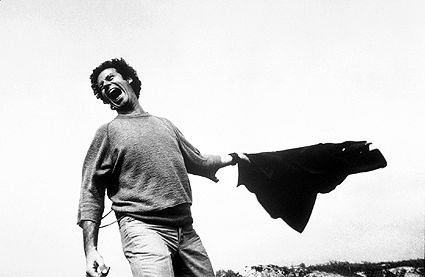 gordon pinsent, writer and star of The Rowdyman, produced by Lawrence Dane and directed by Peter Carter (courtesy Library and Archives Canada/MISA-6535).
PreviousNext

Gordon Edward Pinsent, actor, writer (born at Grand Falls, Nfld 12 July 1930). Gordon Pinsent attended high school in Grand Falls before serving as a private in the infantry division of the Royal Canadian Regiment from 1948-51. Diversely talented, he began his successful career as an actor in Winnipeg where he joined John HIRSCH's Theatre 77. Pinsent appeared in many stage roles in Winnipeg, Toronto and at the STRATFORD FESTIVAL, and performed on radio and TV, including the title role in the notable CBC-TV series Quentin Durgens MP (1966-69).

Newfoundland settings and characters are important in Gordon Pinsent's writings. Responsible for many of his own best roles, Pinsent wrote the screenplay and the musical version of The Rowdyman (film released in 1972), playing the charming and irresponsible character in both. The Rowdyman was published as a novel in 1973 and was followed by John and the Missus in 1974. He also adapted the latter for the stage, playing the leading role at NEPTUNE THEATRE in Halifax. He wrote the screenplay for John and the Missus (film released in 1986) and won the GENIE AWARD as best actor for his portrayal of the title character.

His other Canadian film appearances include Who Has Seen the Wind, Silence of the North and Klondike Fever. He received a Genie Award as best supporting actor for Klondike Fever (1980) and was named best actor for The Rowdyman. He created and appeared in the CBC series A Gift to Last, for which he received an ACTRA Award in 1979. He has acted in the television series Due South (1994-99) and has played the owner of the Hamilton Steelheads in the CTV series Power Play (1998-99). He wrote and played the lead role of Win Morrissey in the Cape Breton-set television film Win, Again! (1999).

His play Easy Down Easy was produced at the Gryphon Theatre in Barrie, Ont, in 1987, and his Brass Rubbings at Toronto's FACTORY THEATRE LAB in 1989.

In addition to his role of Sergeant Fraser Senior in Due South, Gordon Pinsent played Hap Shaughnessy in The Red Green Show for more than 10 seasons. He played a major role in the feature film The Shipping News in 2001, and once more displayed his versatility by writing, directing and acting in Heyday, a movie-of-the-week broadcast in 2006. He received high acclaim in 2007 for his part in the feature film Away From Her, adapted from the Alice MUNRO short story "The Bear Came Over the Mountain" and directed by Sarah POLLEY. Gordon Pinsent won a Genie Award for best actor for his role as Grant, the husband of Julie Christie's Fiona, struggling to cope with his wife's Alzheimer's disease.

Pinsent's talents remain in demand. He hosted The Late Show on CBC Radio and appeared in episodes of Corner Gas (2009), The Listener (2009), Republic of Doyle (2010) and in the miniseries The Pillars of the Earth (2010). In the made-for-television movie Sunshine Sketches of a Little Town (2012), he played narrator Stephen LEACOCK as an adult. He also collaborated with musicians Travis Good (The Sadies) and Greg Keelor (BLUE RODEO), providing the lyrics and spoken poetry for the double album Down and Out in Upalong.

Gordon Pinsent received the EARLE GREY AWARD for lifetime achievement at the 11th Annual Gemini Awards in 1997. He has received numerous awards for his work, including GEMINI awards for his roles in Due South and Powerplay and for his teleplay for Win, Again!. He has been awarded honorary doctorates from the University of Prince Edward Island, Queen's University and Memorial University.

Gordon Pinsent published his first memoir, By the Way, in 1992 and a second, Next, in 2012. He was appointed an Officer in the ORDER OF CANADA in 1979 and promoted to Companion in 1998. In 2004 he was presented with the GOVERNOR GENERAL'S PERFORMING ARTS AWARD, and in 2007 he was honoured with a star on Canada's Walk of Fame.

Gordon Pinsent: Still Rowdy After All These Years (2011), a documentary, was released on the BRAVO channel as part of its Great Canadian Bios series.