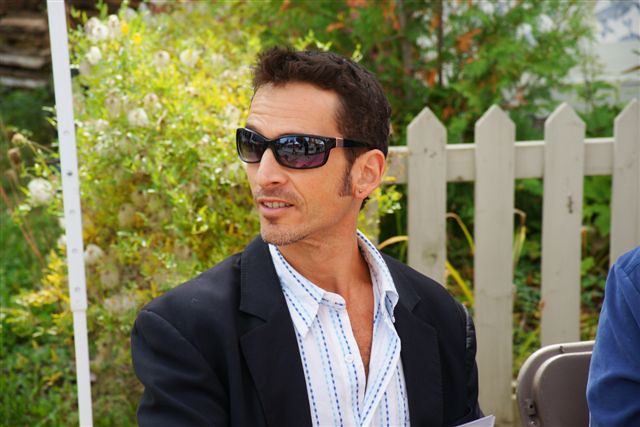 Steven Heighton was born in Toronto and spent his childhood between the city and Red Lake in Northern Ontario. He attended Queen’s University, where he earned a BA in 1985 and an MA in 1986. He has also lived and worked in Western Canada, but after teaching English in Japan for a year he settled in Kingston, Ontario, so that he could “make a go of it as a writer.”

In 2005, Heighton said in an interview with the Queen’s Journal that many of his early poems were written during seminars and lectures while he was a student at Queen’s University. While he was inspired by the content of his courses, outside of the classroom he felt it was important to maintain his artistic individuality. His friends were a “small coterie of artistic people,” including fellow writer Mark Sinnett, “who defined themselves in opposition to a student body more interested in school spirit or a group mentality that encourages uniformity.”

In 1989, Heighton won the Air Canada Award for most promising writer under the age of 30. Since then, he has produced award-winning and bestselling poetry, essays and fiction.

Some of Heighton’s early poems from his time at Queen’s University made their way into his first book of poetry, Stalin’s Carnival (1989), for which he won the $1,000 Gerald Lampert Memorial Award. This collection, which includes a sequence of poems written in the voice of Joseph Stalin, self-consciously explores the poetic process: its lyric moment, quarried language and its frail yet enduring legacy as artifact.

Foreign Ghosts (1989), Heighton’s second collection, documents the writer’s travels in East Asia and combines poetic testimony with journal entries. The Ecstasy of Skeptics (1994) investigates the strange overlap of Eros and death, as it includes an elegy for friend and poet Tom Marshall alongside earthy, passionate love-lyrics. This collection continues Heighton’s investigation into the artistic process in its development of the Nietzschean relationship between Apollo and Dionysus — the competing polarities of the poet’s skeptical and ecstatic mind. The Ecstasy of Skeptics was a finalist for the Governor General’s Award for poetry.

His next collection, The Address Book (2004, with a rare second printing in 2007 and a third in 2016), also received positive reviews. His fifth poetry collection, Patient Frame (2010), was praised for its wide range of themes and its translations of diverse poets like Jorge Luis Borges and Horace. Heighton uses this technique again in his sixth poetry collection, The Waking Comes Late (2016). According to Fraser Sutherland of Quill & Quire, the way Heighton translates and integrates the work of other poets in his work “tests the borders of intertextuality.” Winner of the 2016 Governor General’s Award, The Waking Comes Late explores a range of social issues, with reviewers praising Heighton’s sophisticated engagement with the personal and political.

Steven Heighton was also a bestselling fiction writer. His first book of short stories, Flight Paths of the Emperor (1992), explores the intersection of East and West, past and present, in its pursuit of an evasive cultural authenticity. Amazon listed it as one of the ten best Canadian short story collections. In On earth as it is (1995), his second collection of short fiction, Heighton finds spiritual revelation in love and mortality. His novel The Shadow Boxer (2000), a Canadian bestseller, follows a young boxer-poet on his dark quest to reconcile his inner conflict.

Heighton received international acclaim for his historical novel Afterlands (2005), a fictionalized account of 19 passengers on a North Pole expedition in the 1870s who survived for six months on an ice floe before being rescued off the coast of Newfoundland. Pre-production for a film based on the novel has begun. Heighton’s 2010 novel, Every Lost Country, has also been optioned for film by Rhombus Media. This novel, inspired by true events, follows a Canadian doctor and his daughter who, while on a climbing expedition in Nepal, witness and become involved with a group of Tibetan refugees fleeing Chinese soldiers.

Heighton’s short story collection The Dead Are More Visible (2012) was a Trillium Award finalist and earned praised for its “rich mix of suspense, humour, and intimacy.” His most recent novel, The Nightingale Won’t Let You Sleep (2017), is a literary thriller that brings an abandoned Greek-Cypriot town, Varosha, to life through the eyes of Elias Trifannis, a Canadian soldier with Greek roots.

Heighton’s later fiction is sometimes described as “political thrillers,” and while many of the stories in his novels are fueled by political events, Heighton did not consider his work to be overtly political. He resisted any categorization of his work, telling the Globe and Mail in 2010: “I wanted it [Every Lost Country] to be a literary novel in terms of the conscientiousness of the actual writing, the complications and contradictions of the characters.… like real people.” Characters from diverse backgrounds and viewpoints are explored with no clear distinction between “good guys” or “bad guys.”

From 1988 to 1994, Steven Heighton served as editor of the literary magazine Quarry. He also contributed to numerous anthologies and periodicals and reviewed fiction for the New York Times Book Review.

Heighton served as writer-in-residence at universities and art centres across Canada, including McGill University, Concordia University, Massey College at the University of Toronto, Queen’s University, the University of Ottawa, the Royal Military College of Canada and the University of Prince Edward Island. He also taught creative writing and led workshops at the Banff Centre and the Summer Literary Seminars in St. Petersburg, Russia. He lived in Kingston, Ontario, from 1988 until 2022, when he died of cancer at age 60.

When it came to literary awards, Heighton shared that, to him, the awards “don’t mean anything aesthetically because any number of bad books have won any number of awards.” However, he acknowledged that these awards have helped him earn a living as a writer, even if they have been given to him, in his estimation, for the “wrong reasons.”