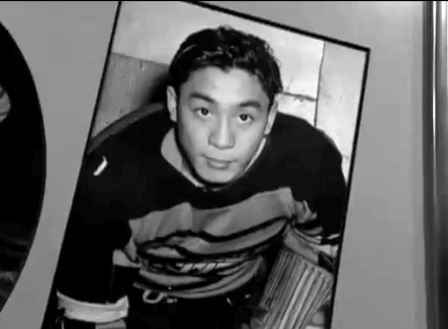 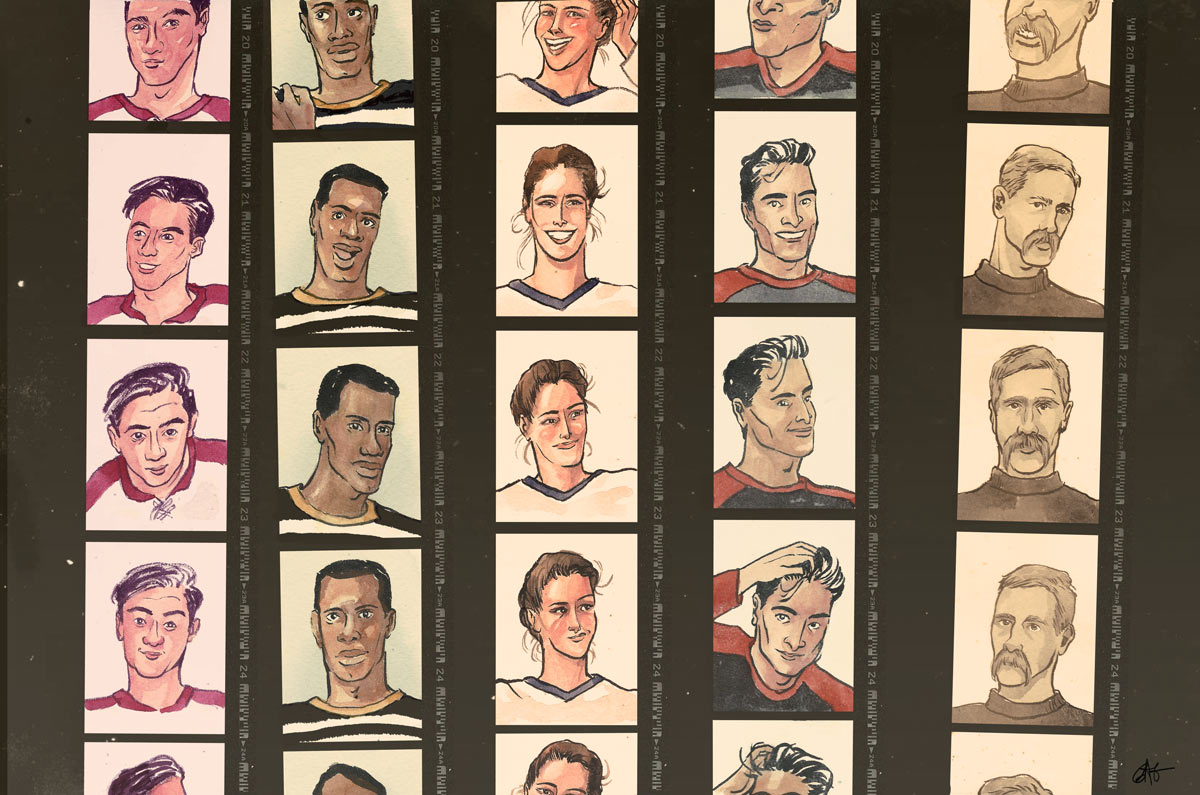 Growing up in British Columbia

Larry Kwong’s father came to Canada in 1884 on a clipper ship and originally settled in Cherry Creek, British Columbia, where he tried to mine for gold. Unable to find his fortune, Kwong’s father moved to Vernon and in 1895 opened a grocery store called Kwong Hing Lung, which translates to “Abundant Prosperity.” He had 15 children — Larry, the second youngest, was born Eng Kai Geong on 17 June 1923.

In a 2011 interview with CHBC News in Kelowna, Kwong recalled that, “When I was a young boy, I couldn’t just go to any barber shop [in Vernon]. They won’t take me because I was Chinese. It didn’t make me feel good.”

When Larry Kwong was only five years old, his father died. His mother took over managing the store, and it was there that he spent much of his time. Like many Canadian children, hockey was a major part of Kwong’s childhood. In a 2009 interview, he remembered going to the top floor of the store every Saturday night to listen to Hockey Night in Canada on the radio. Next to the store, his brothers created a hockey rink by dumping water on an empty lot.

Kwong had to beg his mother to buy him skates. She wasn’t very supportive of him playing hockey at first, but finally agreed that he could play as a reward for helping with various duties. She bought him a pair of skates that were too big, so he would grow into them over the next few winters.

Kwong started playing hockey at the age of seven in Vernon. Almost from the beginning, racist attitudes affected his experience in hockey. Once, when he was nine, his team was scheduled to play in Nelson, British Columbia. Due to the poor weather, they had to travel through the United States. Even though Larry had a birth certificate that showed he was born in Canada, he was not allowed into the United States.

A clever and talented centre, Kwong led the Vernon Hydrophones to the 1939 BC Midget Championship and then the 1941 BC Juvenile Championship. However, with his success came frequent references to his Chinese ethnicity. As a teenager, Kwong was nicknamed the “China Clipper” or “King Kwong.” In the 2011 interview with CHBC News, Kwong remembered that reporters at the time “would say ‘Chinese boy scored so many goals’.”

For the 1941–42 season, Kwong joined the famous Trail Smoke Eaters of the Alberta–British Columbia Hockey League, scoring a very respectable 9 goals and 13 assists for 22 points in 29 games. However, Kwong experienced racism in Trail, too. While his teammates received high-paying jobs at the local smelter, Kwong was only offered a job as a bellhop at a local hotel.

In 1944, Larry Kwong was drafted into the army and stationed in Wetaskiwin, Alberta. He explained to Pacific Rim Magazine in 2012 why he was not drafted until the later stages of the Second World War:

“At the time, they didn’t want the Chinese to be in the army. Then near the end of the war, they decided to draft us. I was drafted and then I had my basic training.”

Kwong originally thought that he would be given an assignment overseas, like so many other Canadian soldiers. Instead, he was instructed to play hockey and entertain the troops. Kwong played for the Red Deer Army Wheelers of the Central Alberta Garrison Hockey League, a temporary league that was open to the military. One of his teammates was Jim Henry, a goaltender with the New York Rangers. In an ironic twist, “hockey probably saved [Kwong’s] life” according to BC Sports Hall of Fame curator Jason Beck.

In 1945–46, Kwong played one more season as a center with the Smoke Eaters, recording 12 goals and 8 assists for 20 points in 19 regular season games. He also played in 10 playoff games for Trail that year and recorded eight goals and one assist for nine points, as the Smoke Eaters won the 1946 Savage Cup (BC Senior A Ice Hockey Championship).

After his season with the Smoke Eaters, Kwong attended a New York Rangers hockey school in Winnipeg in September 1946. He impressed Rangers scout Al Ritchie and was awarded a contract to play with the Rangers’ top minor league affiliate, the New York Rovers of the Eastern Amateur Hockey League. Kwong also moved from center to right wing.

Like the New York Rangers, the Rovers played at the famous Madison Square Garden. Kwong became very popular in the Chinese community of New York. He was given the keys to New York’s Chinatown and was often seen in its nightclubs, surrounded by beautiful waitresses.

Single Game in the NHL

In 1947–48, Kwong led the Rovers with 86 points; it was also the season he got his chance to play for the New York Rangers.

On 13 March 1948, Kwong played for the Rangers against the Montreal Canadiens at the Montreal Forum (the Rangers lost the game 3–2). He had only one minute of ice time in a single shift — not enough time to prove his worth to the team bosses. Kwong never played an NHL game again.

Years later, he still felt disappointed with the lack of ice time. “I didn’t get a real chance to show what I [could] do,” he remarked to The New York Times in 2013.

Disappointed by his brief experience in the NHL, Larry Kwong left the Rangers following the 1947–48 season to play hockey in Québec. From 1948 to 1955, Kwong was a regular member of the Valleyfield Braves and was coached by the legendary Toe Blake (Blake coached the Braves from 1951 to 1954 and later coached the Montreal Canadiens, winning eight Stanley Cups).

Kwong’s best season with the Braves came in 1950–51. Kwong, who had returned to centre, and teammate André Corriveau were the Quebec Major Hockey League’s (QMHL) co-leaders in assists with 51. That season, Kwong was also third in goal-scoring (34) and second in points (85) in the QMHL. With Kwong and Corriveau providing the necessary offence, the Braves won the first Alexander Cup in 1951, a “Major Senior” national championship open to both professional and amateur teams. For his outstanding year, Kwong won the Byng of Vimy Trophy, awarded to the QMHL most valuable player, and was a QMHL first all-star team selection at center.

Kwong also played against the legendary Jean Béliveau, who was a member of the Quebec Aces at the time. Béliveau had great admiration for Kwong’s abilities: “Larry made his wing men look good because he was a great passer. He was doing what a centre man is supposed to do” (The New York Times, 20 February 2013).

In 1957, Larry Kwong’s playing career was far from over. He spent an additional seven years playing in Europe — one in Great Britain and six in Switzerland. In his one season in the British Hockey League (1957–58), he scored 55 goals in 55 games with the Nottingham Panthers.

Kwong returned to Canada in 1972 to operate a grocery store in Calgary, Alberta, with his brother Jack. He has been very active in the Calgary community and has held season tickets for the Calgary Stampeders for over 35 years.

Kwong’s story was featured for 11 minutes in the 2011 film Lost Years: A People’s Struggle for Justice. The film won the best documentary award in history and culture at the 2011 Guangzhou International Documentary Film Festival. In 2014, an hour-long documentary titled The Shift: The Story of the China Clipper, was produced by filmmakers Chester Sit and Wes Miron. The film has been shown on Omni Television in Canada in Cantonese, English and Mandarin.