Pierre Poilievre was born in Calgary, Alberta. His mother was an unwed teenager who placed her newborn for adoption. He was adopted by two teachers, Donald and Marlene Poilievre. Pierre Poilievre later said that his adoption gave him the foundation for his conservative views, as it demonstrated to him that “voluntary generosity” is at the core of community, not government involvement in people’s lives.

Growing up in Southwest Calgary’s Shawnessy area, Poilievre enjoyed hockey, diving and wrestling. But as a young man his real love became politics. While attending Henry Wise Wood High School, Poilievre was a member of the Conservative Club and participated in a University of Calgary model United Nations. Poilievre sold Reform Party memberships for future federal Cabinet minister and Alberta premier Jason Kenney. In 1996, when Poilievre was 17 years old, he attended a Reform Party convention.

In 2008, Poilievre earned a Bachelor of Arts in international relations at the University of Calgary. While there, he became the Reform Club’s vice-president. He was also among 10 finalists who won $10,000 in the As Prime Minister essay contest. His 2,500-word entry was titled “Building Canada through Freedom.” In an argument that would echo throughout his political career, Poilievre wrote that freedom is the foundation of Canadians’ personal prosperity and of Canada’s democracy. The essay’s ideas were consistent with his reading of Milton Friedman’s Capitalism and Freedom, which Poilievre later said was “seminal” to his political thinking.

Poilievre’s essay won him the chance to meet Prime Minister Jean Chrétien. Showing an early proclivity for partisan jabs, he told the Calgary Herald, “I just hope that none of my views are offensive to the prime minister because many of them come into conflict with the outdated system he has run for the past few years.”

When the Reform Party evolved into the Canadian Alliance in January 2000, Poilievre volunteered as a fundraiser in Stockwell Day’s successful bid to lead the new party. He then accepted Day’s offer to be one of his legislative assistants in Ottawa.

In December 2003, the Progressive Conservative Party and the Canadian Alliance merged to form the Conservative Party of Canada, led by Stephen Harper. Shortly afterward, Poilievre won the party’s nomination in the Ottawa area riding of Nepean-Carleton. A few months later, Liberal prime minister Paul Martin called an election for 28 June 2004.

Poilievre ran against two-term incumbent and Liberal defence minister, David Pratt. Poilievre told his parents that he expected to lose, but he defeated Pratt by 3,700 votes. At 25, Poilievre was the youngest MP in Parliament.

He quickly won national attention for his blistering partisan attacks on people and policies he opposed. He was caught on camera swearing at fellow committee members and later had to apologize for making a rude gesture in the House of Commons. He used the racist phrase “tar baby” in reference to a federal carbon pricing policy. Some called him Stephen Harper’s “attack dog.” Poilievre justified his combative style by saying, “I think the ideas I work toward are worth fighting for, and to do that, you frequently have to point out the flaws of the alternatives." Parliamentary staffers voted him the hardest working MP in 2006.

In the 2006 federal election, Poilievre was re-elected with 55 per cent of his riding’s votes. The Conservative Party formed a minority government. Prime Minister Harper appointed Poilievre the parliamentary secretary to the president of the Treasury Board. His most significant work was helping to draft and pass the Federal Accountability Act. Signed into law in December 2006, it sought to bring more transparency to campaign financing, lobbying, appointments, procurement and whistleblower protection.

In June 2008, on the day before Harper was to apologize to Indigenous peoples for the government’s role in residential schools, Poilievre disparaged the compensation money that would accompany the apology. He said, “My view is that we need to engender the values of hard work and independence and self-reliance. That's the solution in the long run — more money will not solve it.” The next day he apologized in the House for his remarks.

The October 2008 federal election saw Poilievre keep his seat with 55.8 per cent of the vote. In November 2008, Poilievre was appointed parliamentary secretary to the prime minister and to the minister of intergovernmental affairs.

In 2009, Liberal leader Michael Ignatieff and Prime Minister Stephen Harper agreed to form a working group to study employment insurance reform. But Poilievre’s reputation as a scrappy partisan was so strong that his appointment to the group was seen by many as a successful attempt by Harper to sabotage the initiative.

In 2012, Poilievre advocated making union dues optional for members of the federal civil service. To critics who said he was trying to destroy unions he replied, “You can call it that. I consider it enhancement of workers’ rights and freedoms.” His work contributed to the passage of Bills C-377 and C-525, two pieces of anti-union legislation that were repealed with the passage of the Liberal’s Bill C-4 in 2017.

In a July 2013 Cabinet shuffle, Poilievre was appointed minister of state (democratic reform). In February 2014, he tabled Bill C-23, the Fair Elections Act. The opposition, scholars and editorial writers claimed it would make voting more difficult. Parliamentary wrangling and the adoption of numerous amendments ended with C-23’s passage in May.

In a February 2015 Cabinet shuffle, Poilievre was promoted to minister of employment and social development. With the Conservatives already focusing on economic issues to win the upcoming election, the appointment demonstrated confidence in Poilievre’s abilities.

In July 2015, Poilievre announced that monthly child benefit payments for children under the age of six would rise from $100 to $160 per child. Further, the increase would be retroactive for six months so that parents with children under 6 would receive $420 per child, while those with children aged 6 to 17 would receive $520 per child. Due to the looming election call, critics called the announcement crassly political. Poilievre was criticized for wearing a blue golf shirt with a Conservative Party logo when he made the announcement. Two years later, the election commissioner determined that the event broke campaign finance rules.

On 19 October 2015, 184 Liberal candidates were elected, and the party formed a majority government led by Justin Trudeau. Poilievre’s riding was among many that were redrawn prior to the election and was renamed Carleton. He won re-election with 47 per cent of the vote, compared to 44 per cent for Liberal candidate Chris Rodgers.

The years following the post-election resignation of Stephen Harper saw the Conservative Party struggle with interim leaders and two disappointing leaders. Meanwhile, Poilievre served as critic of the Treasury Board; of the department of employment and social development; and then of finance.

The federal election in October 2019 returned the Liberals to power with a minority government. Poilievre was again re-elected in Carleton. When Conservative Party leader Andrew Scheer resigned, Poilievre initially prepared to run for leader but then withdrew, saying he needed time with his young family.

Poilievre won his riding again in the election held on 20 September 2021. Many Conservative Party supporters and caucus members believed that Conservative Party leader Erin O’Toole had misplayed the campaign, which saw the Liberals returned with another minority government. O’Toole resigned on 4 February 2022, two days after 73 of 118 caucus members voted to replace him.

The next day, Poilievre announced that he would run for the Conservative Party leadership. Consistent with his views since high school, he said that his goal was to make “Canadians the freest people on earth.”

Throughout his leadership campaign, Poilievre said that he was running not for the leadership of the Conservative Party but to become prime minister, so that he could make Canadians freer. In early 2022, the so-called Freedom Convoy temporarily blocked a Canada-United States border crossing in Alberta and occupied downtown Ottawa from 29 January to 21 February. The activists called for COVID-19 vaccine mandates to end and for Prime Minister Justin Trudeau to resign. Poilievre unreservedly supported the protest. On 28 January, he had himself filmed with protest leaders and said that they represent “the people who want to stand and speak for their freedoms.”

Polls indicated that Poilievre was the front-runner throughout the leadership campaign. Critics pointed to his more controversial statements, such as his pledge to fire the Bank of Canada governor and his suggestion that Canadians should escape inflation by investing in cryptocurrency. However, his crowds at over 80 campaign events were large and polls showed a growing lead over other leadership contenders, such as former Quebec premier Jean Charest and Brampton mayor Patrick Brown. The Poilievre campaign sold 311,958 party memberships. It was an astounding figure, given that Andrew Scheer had won the party leadership in 2017 after selling fewer than 10,000.

By the time Poilievre won the Conservative Party leadership on 10 September 2022 — on the first ballot with 68.2 per cent of the vote — his victory was seen as a foregone conclusion. In his victory speech, Poilievre committed himself to helping Canadians hurt by the volatile post-pandemic economy. He said that Canadians “need a prime minister who hears them and offers them hope that they can again afford to buy a home, a car, pay their bills, afford food, have a secure retirement and, god forbid, even achieve their dreams if they work hard.”

On 13 September, Poilievre announced his nine-member team that would lead the official opposition. He said its primary job was to stop the government’s proposed tax hikes and end inflation, which he dubbed “Justinflation” in an effort to pin the blame on Justin Trudeau.

Prime Minister Trudeau missed the first two Question Periods of the new House session to attend Queen Elizabeth II’s funeral and a United Nations General Assembly meeting. Poilievre’s first chance to confront the prime minister as the new Opposition leader came on September 22. He served notice that his stinging partisanship would continue when he said, in French, “It is good to see the prime minister, who is visiting Canada to fuel up the gas in his private jet.” In subsequent questions, he attacked the government for failing to end inflation.

Poilievre met Venezuela native Anaida Galindo when she was working as a parliamentary aide. They were married in Portugal in December 2017. They have two children, Valentina and Cruz. 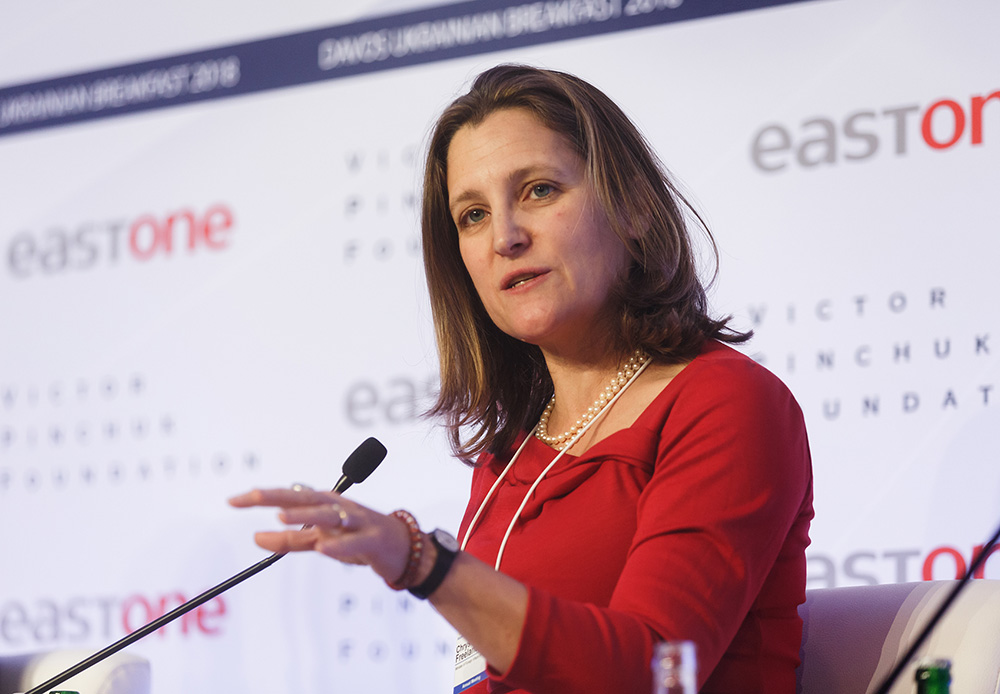