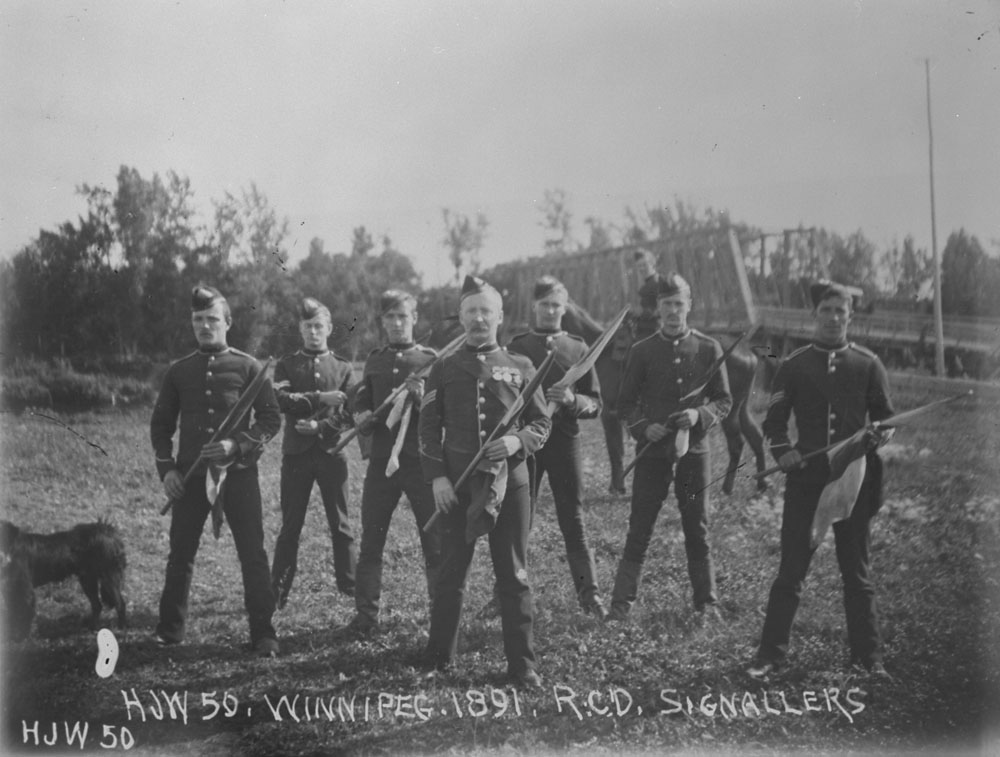 In 1883, the Canadian government passed a new Militia Act, which authorized a small regular force of cavalry and infantry. The cavalry component was established in Quebec City on 21 December 1883 as the Cavalry School Corps.

In 1885, in reaction to the North-West Rebellion, the federal government placed A Troop of the Cavalry School Corps and other units on active service. The troop patrolled the government force’s main lines of communication during the rebellion. (See also Battle of Batoche, Major-General Frederick Middleton).

On 24 May 1893, after a series of name changes, the Cavalry School Corps was designated The Royal Canadian Dragoons (RCD). The RCD provided soldiers to the Yukon Field Force in 1898 to assist the North-West Mounted Police in maintaining law and order during the Klondike gold rush.

The Dragoons also served in the Boer War (or Second South African War). They were part of the Second Canadian Contingent, which included the 1st and 2nd Battalions Canadian Mounted Rifles. The Dragoons formed the basis of the 1st Battalion, which was subsequently redesignated the RCD at the request of the commanding officer. It served in South Africa from February 1900 to January 1901.

The regiment’s most famous action was at Leliefontein on 7 November 1900 during a harrowing rearguard operation. Three Dragoons received the Victoria Cross: Lieutenants Richard Turner and Hampden Cockburn for their courage in saving the guns of D Battery Royal Canadian Horse Artillery and Sergeant Edward Holland for saving a Colt machine gun. 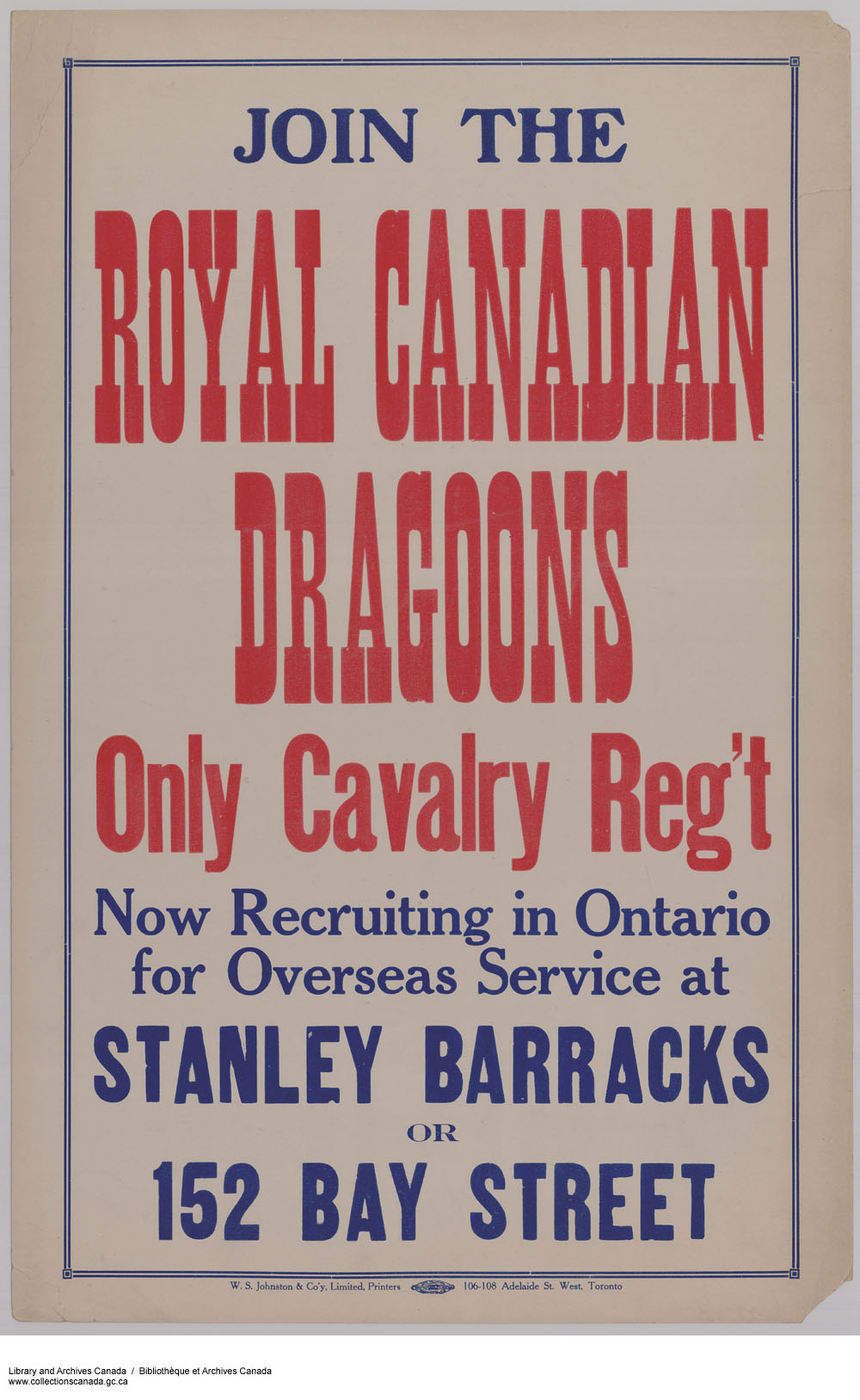 The Dragoons mobilized in September 1914 and sailed to England with the First Canadian Contingent in October. The RCD went to France in May 1915 as part of the Canadian Cavalry Brigade, which initially served as infantry with 1st Canadian Division. (See First World War and Canadian Expeditionary Force.)

The unit returned to its horses in 1916, and the brigade became part of the British Cavalry Corps. There was little scope for mounted action, however, due to the static nature of trench warfare and the unsuitable terrain for horses between the opposing forces on the Western Front. Mounted soldiers — and their horses — were also vulnerable to the firepower of modern weapons; the days of the mass cavalry charge were nearly over. As a result, most of the regiment’s battles were dismounted.

On 30 March 1918, the Dragoons participated in one of the last great cavalry actions in history. At Moreuil Wood near Amiens, the Cavalry Brigade charged advancing enemy troops during the German spring offensive. Although the regiment suffered heavily, the charge was successful and stopped the German advance.

The Battle of Amiens on 8 August marked the beginning of the period known as “Canada’s Hundred Days.” With the Germans retreating in the face of Allied advances, the RCD participated in several mounted attacks against German strong points. In October, the regiment helped capture the town of Le Cateau — its last action of the war. 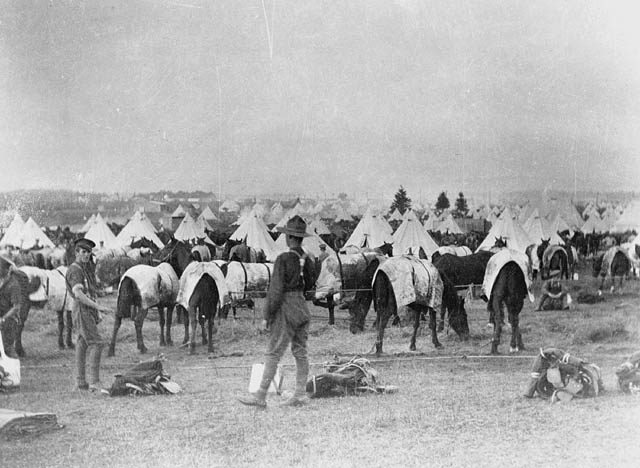 After the war, the regiment returned to garrison duty in Canada, where its main task was training the militia. With the approach of war in Europe, the government began a few half-hearted attempts at rearmament. An Armoured Fighting Vehicle School was established, and the Dragoons received two experimental armoured cars.

The RCD was placed on active service in September 1939. Initially, Dragoons were used as infantry instructors. In 1940, the RCD was mobilized and formed part of two composite units before it became an armoured car regiment. In November 1941, it sailed to Britain as the armoured car regiment of 5th Canadian Armoured Division.

"The [M4] Sherman was a fairly light tank and the armour wasn’t all that heavy on it because of it being a light tank. It was good for protection inside. Even .50 calibre machine gun bullets would just bounce off. But the German anti-tank guns — even their armor-piercing shells from 1500 yards wouldn’t even slow down going through our armour." Glenn Rowe served with The Royal Canadian Dragoons in the Northwest Europe Campaign, 1944–45. Read his testimony here. 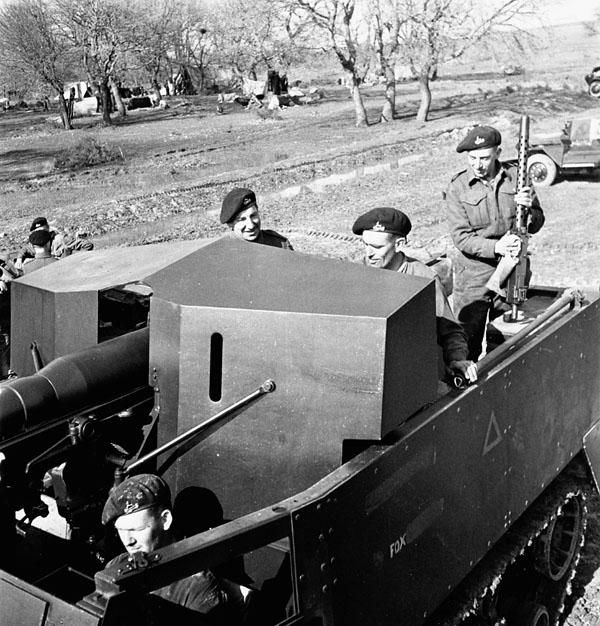 In 1951, the RCD supplied the first armoured squadron for NATO duty in Europe. It reequipped with 50-ton British Centurion tanks by the end of 1952. In April 1954, D Squadron went to Korea for a six-month tour after hostilities had ceased, using Sherman tanks rented from the US Army. (See Korean War.)

When Canada increased its European contribution to NATO in 1957, the entire regiment served as part of Canada’s new NATO Brigade Group. The Dragoons were stationed in Germany in 1957–59 and 1970–87. The regiment’s Centurions were replaced with 42-ton German Leopards in 1977. Between 1960 and 1970, the regiment served at CFB Gagetown, New Brunswick.

From the 1950s to early 2000s, the regiment — or detached squadrons — deployed on multiple rotations of peacekeeping missions in Egypt, Cyprus, Somalia and the Balkans, under both United Nations and NATO mandates. These missions usually involved reconnaissance squadrons equipped with light armoured vehicles such as the Ferret scout car, Cougar or Coyote.

From 2004 to 2011, the RCD provided several reconnaissance squadrons to fight in Afghanistan. Equipped with newly purchased Leopard 2s, the regiment also contributed to tank squadrons.These units saw the regiment’s first combat actions since 1945.Based in either Kabul or Kandahar, they formed part of NATO’s International Security Assistance Force until the end of Canada’s combat mission in 2011. 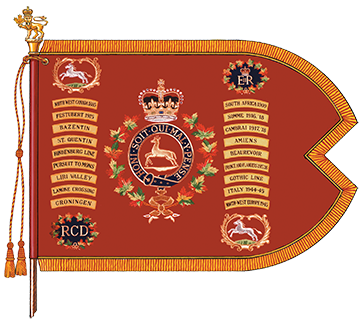 Badge: A springbok bounding on a grassy plain above a scroll inscribed “ROYAL CANADIAN DRAGOONS.” The regiment’s cap and collar badges are based on an incident during the Boer War. When a herd of grazing springboks near some Dragoons stationed in an outpost were suddenly startled, it alerted the soldiers to a pending Boer attack, which they then repelled.

Additional Badge: The Royal Cypher surmounted by the Crown

Michael McNorgan and Allan Halfper, Into their Second Century: An Illustrated History of the Royal Canadian Dragoons 1983–2018 (2020).