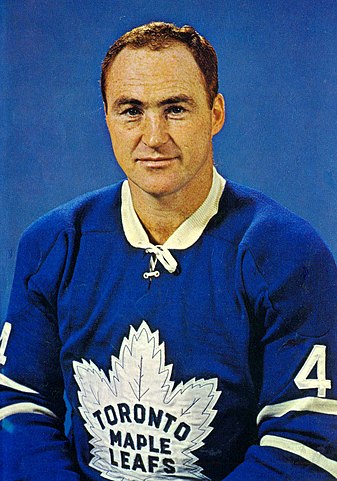 Trading card photo of Red Kelly as a member of the Toronto Maple Leafs. These cards were printed on the backs of Chex cereal boxes in the US and Canada between 1963 and 1965.

Kelly’s ancestors, originally named O’Kelly, immigrated to Ontario from Ireland in the 1850s (see also Irish Canadians). Kelly grew up on the family tobacco farm near Simcoe, Ontario, playing hockey on outdoor rinks from an early age. He left home at 16 to attend St. Michael’s College School in Toronto, a junior hockey powerhouse where his father had also been a student. Red won a welterweight boxing title while at St. Mike’s but was a late bloomer as a hockey player. He was cut from the school’s hockey team three times before finally making the Midget squad as a third-liner. He proved to be a smooth-skating mobile defenceman and was a key player on St. Mike’s Memorial Cup-winning team in 1947.

Kelly was overlooked in the draft by the Toronto Maple Leafs, the team that sponsored St. Mike’s and thus had territorial rights to him, and instead signed with the Detroit Red Wings. He joined the team as a fifth defenceman in the 1947–48 season and became a regular after Doug McCaig broke his leg around Christmas time. Kelly quickly established a reputation as an exceptional puck-handler and finished his rookie season with six goals, 14 assists and 13 penalty minutes. He also finished third in voting for the Calder Cup for rookie of the year. (King Clancy called Kelly “the best rookie defenceman the league has ever seen.”)

In Kelly’s first two seasons with the Red Wings, the team lost to Toronto in the Stanley Cup final before winning in 1950. The “Big Red Machine” won the Stanley Cup again in 1952, 1954 and 1955, led by the likes of Kelly, Gordie Howe, Ted Lindsay and Terry Sawchuk. Kelly was awarded the Lady Byng Trophy as the NHL’s most gentlemanly player in 1951, 1953 and 1954. He also won the inaugural Norris Trophy in 1954 as the league’s best defenceman. 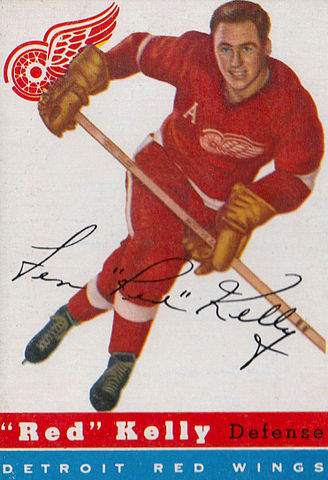 Kelly was an all-star in eight of his 13 seasons with Detroit, but he never had more than a one-year contract with the Red Wings. His strained relationship with the club finally ended in February 1960 when he was told he had been traded to the New York Rangers. Rather than report to his new team, Kelly retired. “I started to work the next day with a tool company,” he said in 2003. “But hockey was my whole life. I loved hockey ever since I was knee high to a grasshopper.” The Toronto Maple Leafs convinced Kelly to play for them, and several days later he agreed to a trade to Toronto.

Maple Leafs’ coach Punch Imlach shrewdly converted Kelly from defence to centre and used him as a checker against the best centres in the league, such as the Red Wings’ Gordie Howe, the Chicago Blackhawks’ Stan Mikita and the Montreal Canadiens’ Jean Béliveau. In his first season with the Leafs, Kelly won his fourth Lady Byng Trophy as well as the J.D. Bickell Trophy as the Maple Leafs’ most valuable player. Toronto lost to Montreal in the Stanley Cup final that year but won the Cup in 1962, 1963, 1964 and 1967 (see also Toronto Maple Leafs 1967: The Last Stanley Cup).

Kelly retired following the Stanley Cup victory in 1967, turning down a four-year contract offer from the Leafs. He finished his NHL career with 281 goals and 542 assists for 823 points in 1,316 regular season games. He also scored 33 goals and 59 assists in 164 playoff games. In 1969, he was inducted into the Hockey Hall of Fame, which waived its standard three-year waiting period. 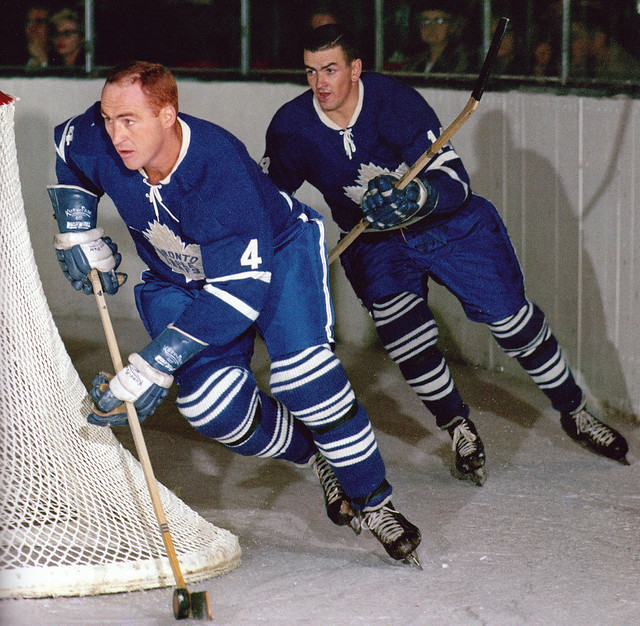 Red Kelly and Dave Keon (left to right) playing for the Toronto Maple Leafs in the 1960s.

Kelly continued his career in hockey as a coach. He was the first head coach of the expansion Los Angeles Kings, leading them to two consecutive playoffs in his two seasons with the club. He was the second head coach of the Pittsburgh Penguins (1970–73) and then accepted an offer from an incarcerated Harold Ballard to become the head coach of the Toronto Maple Leafs. Kelly coached the Leafs — led by Daryl Sittler, Norm Ullman, Paul Henderson and Lanny McDonald — to four consecutive quarterfinal appearances.

Kelly’s most (in)famous season with the Leafs came in 1975–76. During the second round of the 1976 Stanley Cup playoffs, when the Leafs were down 2–0 in the series to the Philadelphia Flyers, Kelly placed five plastic pyramids under the players’ bench to optimize their positive energy during the game. (His wife had read about the alleged benefits of pyramids and had used the technique to help their daughter overcome a series of headaches. Kelly admitted at the time that he “was ready to try anything.”) He also hung a large plastic pyramid in the centre of the Leaf’s dressing room and had the players stand under it or place their sticks near it. Team Captain Daryl Sittler, who led the charge in using the pyramid, scored five goals in the next game, tying the playoff record for most goals in a game set by Maurice Richard in 1944. The Leafs went on to tie the series 2–2 and eventually forced a decisive game seven, which they lost 7–3. But “Pyramid Power” became part of Maple Leafs lore.

While playing for the Toronto Maple Leafs, Kelly also served two terms as a Member of Parliament for the Liberal Party, from 1962 to 1965. In a 1989 interview with the Canadian Parliamentary Review, Kelly remembered how Lester Pearson approached him about running. “I told Mr. Pearson I did not think it was possible to combine the two. He agreed! … But Lester Pearson had a great ability to bring people together and the more we talked the more I liked and admired him. I decided I would do whatever I could to help him become prime minister.”

Kelly was elected in the Toronto riding of York West in a 1962 byelection. He won again in 1963, when Pearson’s Liberal Party defeated John Diefenbaker and the Conservatives. In that election, Kelly’s opponent on the Conservative side was Alan Eagleson, hockey’s first player agent and the future head of the NHL Players’ Association. But commuting to Ottawa to moonlight as a parliamentarian was as gruelling as Kelly had expected. During the 1964 Stanley Cup playoffs, he had to have his knee frozen before the game and was so exhausted afterward, he passed out in the shower. “That was a tremendous experience,” he said in 1989. “I enjoyed those years. But it was tough doing both things. I thought I had one foot in the grave.”

Kelly led the league in scoring among defencemen for five consecutive seasons, from 1949 to 1954, the year he won the inaugural Norris Trophy for best defenceman. It is believed by many that his stellar play inspired the creation of that award. His Detroit Red Wings teammate Ted Lindsay said that Kelly “was the forerunner of the rushing defenceman. He and Doug Harvey.” Meanwhile, Jean Béliveau once said that having Red Kelly play centre was the key ingredient to the Maple Leafs’ string of Stanley Cup victories in the 1960s.

In 1997, Kelly was ranked No. 23 on the Hockey News’ list of the Top 100 players of all time, just behind Patrick Roy and ahead of such players as Ken Dryden, Paul Coffey, Henri Richard and Jaromir Jagr.

Following his retirement from coaching in 1976, Kelly ran a successful aircraft maintenance company. He met his wife, figure skater Andra McLaughlin, when he accompanied good friend Gordie Howe on a date with figure skater Barbara Ann Scott. Kelly and McLaughlin were married from July 1959 until his death in 2019.

In honour of his achievements, Kelly was named to the Hockey Hall of Fame in 1969, which waived its standard three-year waiting period. He was made a member of the  Order of Canada in 2001. On 3 October 2014, Canada Post issued a collection of stamps honouring six legendary NHL defencemen from the Original Six era (1942–67), including Kelly, Tim Horton, Pierre Pilote, Bobby Orr, Doug Harvey and Harry Howell.

On 15 October 2016, as part of the Toronto Maple Leafs’ centennial anniversary, the team retired his No. 4 (also worn by Hockey Hall of Famer Hap Day from 1924 to 1937). The Detroit Red Wings followed suit and retired their No. 4 in Kelly’s honour on 1 February 2019. In 2017, statues of Kelly, Frank Mahovlich, Charlie Conacher and Wendel Clark were added to the Maple Leafs’ “legends row” outside Toronto’s Air Canada Centre (now Scotiabank Arena).

Following Kelly’s death in 2019, NHL commissioner Gary Bettman said Kelly’s career was “so storied and distinguished that it may never be duplicated… Red was the ultimate hockey renaissance man who seemingly could do it all.”