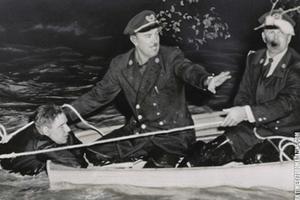 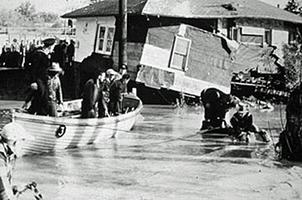 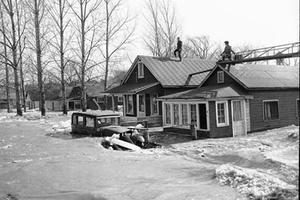 Hurricane Hazel was one of the most devastating and unpredictable tropical storms of the 20th century. It was first identified on 5 October 1954, in the Caribbean, where it smashed into Haiti and then battered the Carolinas. The storm struck Toronto on 15 October with winds of 124 km/h and record rainfall.

By 7:00 PM the winds had abated, but the worst was yet to come. The flood plains of Toronto's several river systems, deforested and already saturated by days of rain, simply could not contain the downpour. Dramatically overflowing its banks, the cascading Humber River ripped entire homes from their foundations, killing more than 30 people on Raymore Drive alone.

Many brave rescue efforts were undertaken, even though the current on the rivers imperiled rescue boats. In Weston, off-duty police officer Jim Crawford and Herb Jones, a contractor, risked their lives on the turbulent Humber saving 50 lives. Five firefighters from the Kingsway-Lambton Fire Station were killed when they went to rescue people stranded in a car by floodwaters from the Humber River.

In all, Hurricane Hazel left 81 dead in Toronto, nearly 1900 families homeless and caused over $25 million in damages.

As a result of the tragic loss of life and lack of preparation, local municipalities and the province developed a comprehensive plan for flood control and water conservation that has transformed the region. The resulting public acquisition of valley lands and restrictions on development in flood plains have left a legacy of treasured green spaces in the city and beyond.