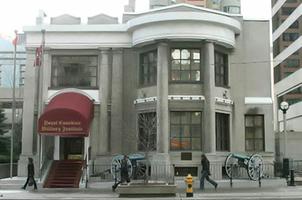 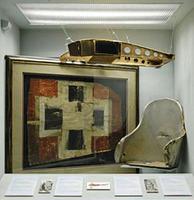 "Housing for the Red Baron's Seat"

Lieutenant-Colonel William Otter wasn't satisfied with the state of the Canadian militia's military knowledge at the end of the 19th century. He believed the militia was more interested in drills and preparing for band concerts than studying contemporary warfare and serving as Canada's front-line of defence. Along with the other founders of the Canadian Military Institute (the "Royal" prefix was granted by George VI in 1948), Otter wanted to get away from images of battle steeped in the Napoleonic Wars and the Crimean conflict and familiarize the militia with the modern battlefield.

Established in 1890 with Otter as its first president, the institute developed the largest private military library in the country and has served as Canada's premier independent body for the study of military strategy, arts and literature. As times have changed, the institute's mandate has come to include strategic studies and public education about Canada's defence needs.

Among the institute's museum holdings is one that would make Snoopy proud: the seat of the Fokker triplane in which Baron Manfred von Richthofen, aka the Red Baron, made his final flight. The seat was donated in 1920 by Captain A. Roy Brown, who was officially credited with shooting down the German flying ace two years earlier.

The institute's century-old home at 426 University Avenue was demolished in 2010. Though temporarily housed in the Albany Club, the institute will move back into the base of a condo tower being erected on its former site.