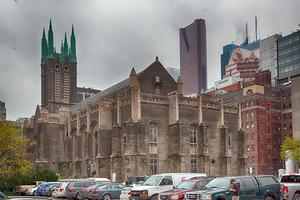 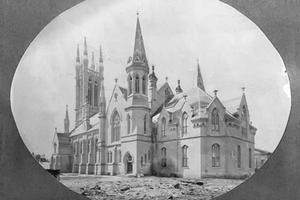 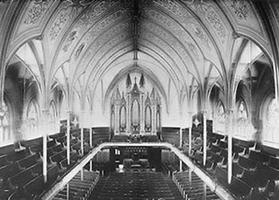 "The God that Answereth By Fire"

Twelve hours after the evening service of 30 Jan 1928 - at which a sermon was preached on the text "The God that answereth by fire, let him be God" - Metropolitan United Church caught fire. Within hours, one of Toronto's great architectural landmarks was gone.

The impressive church that burned that day dated back to 1872. Over the course of the 19th-century, Toronto Methodists had grown tired of their deliberately simple, unadorned meeting houses, which explicitly rejected the more elaborate church architecture of other denominations. Externally, their new Gothic Revival edifice, dubbed the "cathedral of Methodism," was an effort to surpass both the nearby ST JAMES ANGLICAN and St. Michael's Roman Catholic churches.

The interior of the church, however, consisted of a rectangular auditorium with galleries around 3 sides. There was no sign of an altar, as Methodists had no use for the liturgical forms of Anglicans or Roman Catholics. The church featured the first CARILLON in North America and the largest organ in Canada.

After the fire the rebuilt church retained the front wall and tower, but inside the architect laid out a more cathedral-like plan, with distinctive nave, aisles and transepts, losing the characteristic communal, tent-like enclosure of the original. There were vociferous objections that the new plan was a denial of the nonconformist ideology of METHODISM. But Methodism in Canada had evolved into the UNITED CHURCH, and its "cathedral" had changed along with it.