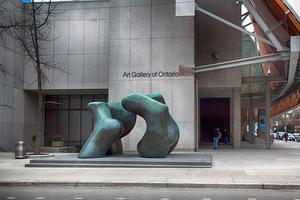 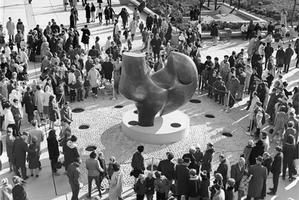 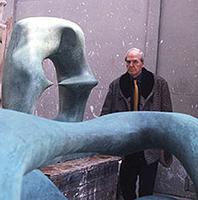 From a flood-lit dais on the chilly evening of 27 Oct 1966, dignitaries pulled back a tarp to officially unveil Henry Moore's abstract sculpture, Three Way Piece No. 2 - more commonly known as The Archer. Newspaper reporters - who had already dubbed it "Henry Moore's big bronze whatchamacallit" - gathered reaction among the assembled crowd of more than 5000.

"Good grief," one observer moaned. "I think it's horrid," another scoffed. "Actually, I can't make head or tails of it." Now warmly regarded by locals, the monumental, abstract sculpture was the first piece of modern art installed in a public space in the city. The New City Hall, with curved towers hugging saucer-shaped council chambers, was intended by its designer, Viljo Revell, as an expression of the city's growing cosmopolitanism. Revell sought a suitably monumental abstract sculpture for the adjacent public square, and commissioned a work from internationally renowned British sculptor Henry Moore.

At first, the design was not accepted; many councillors and citizens felt that the city council should concern itself with sidewalks and sewers, not abstract art, although $100 000 had been set aside for the purchase. After Revell's death, Mayor Philip Givens and others championed the purchase of Moore's piece and Givens spearheaded a fundraising campaign that quickly secured more than $100 000. Moore, a great admirer of Revell's building, sold the city the sculpture at a discounted rate. Even the shipping and installation costs were donated.

Despite his not having spent a penny of public funds on The Archer, Givens was hurt by the modern art controversy and lost his bid for re-election shortly after the unveiling. In 1974, in gratitude to the city, Henry Moore donated more than 200 sculptures, drawings and prints to the Art Gallery of Ontario, which now boasts the largest public collection - more than 900 sculptures and works on paper - of Henry Moore's art work in the world. 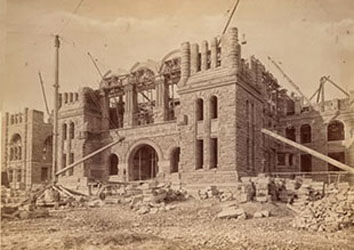